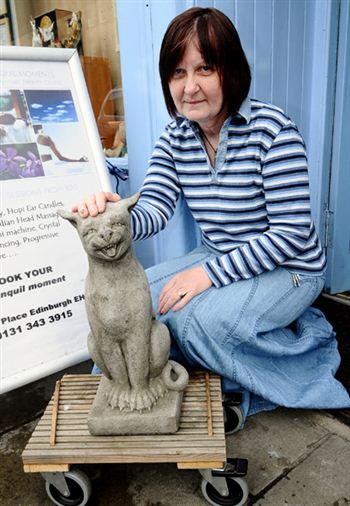 THIEVES who are grabbing Buddha statues from shops have been warned they could be cursed with a run of bad luck.

The two heavy artefacts were stolen from bustling shopping streets – even though they needed a trolley to be lifted by staff.

Now the shameless robbers have been told to expect a spiritual payback for their crimes.

Alison Siwek, holistic healer at one of the targeted Edinburgh stores, said that whoever pinched the weighty sculpture obviously doesn’t understand the spiritual world.

She said: “I just can’t fathom someone planning to steal a spiritual statue of a Buddha – it is totally sickening.

“This is a despicable theft of a religious object. I couldn’t imagine someone walking into a church and stealing a crucifix; it’s the same sort of principle.

“I believe universal rules apply here and what you give out of life will come back to you.”

The 54-year-old, who specialises in crystal therapy, urged the thieves to return the statue to the Tranquil Moments store – and cancel out any bad karma.

She said: “In this line of work we believe that life pays you back and my message to anyone stealing Buddha statues is to return them.

“People buying the statues for a spiritual reason wouldn’t want something that was stolen anyway because they know it would bring bad karma.

“Even if it is under the cover of darkness, they really need to bring the Buddha back here and cancel out the bad or it will come back to them in some way.”

The Stockbridge shop, which also sells holistic goods, had the Buddha statue worth £50 sitting on a trolley outside – as it weighed too much to lift every day.

But shocked owner, Hazel Thomson, described how the thieves left the trolley sitting and made off with the heavy seated Thai Buddha on April 23.

She said: “I couldn’t believe it when I noticed he had gone. It must have happened during lunchtime when we were busy but no-one noticed anything suspicious.

“He was really, really heavy and I don’t know how someone would have been able to lift him on his own.

“I have ordered more statues and don’t know what to do to stop this happening again.

“Someone suggested chaining him to the front of the shop but there is no way I can do that – it’s disrespectful to put a Buddha in chains.”

A similar statue – worth £450 – was taken from another store on Morningside Road weeks earlier.

Thieves snatched the metre-tall statue from the Azalay gift shop around April 9 and police are treating the thefts of the unusual Buddhas as linked.

A Lothian and Borders police spokeswoman said: “It’s possible those responsible for the thefts are now trying to sell them on.

“Both items are fairly unique, and not easily removed given their size, so we’re looking to talk to anyone who may have been in the areas and saw the statues being removed.”