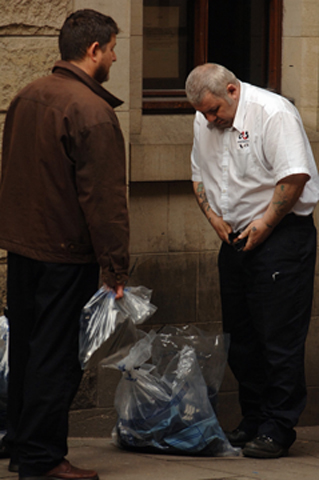 TWO security guards who stole £10,000 they were paid to protect have been jailed.

Gary Docherty, 41, and colleague Hugh Drummond, 47, had collected thousands of pounds from each branch of the Royal Bank of Scotland as they worked for Group 4 Security.

But after making one pick-up, Drummond noticed that the plastic safe-style box he had been given was not secured correctly, and money could be taken out.

The bungling pair decided to cash in, stealing a bundle of notes amounting to £5,000 each.

But their scam was foiled as soon as they made the drop off at the bank’s headquarters, when a supervisor noticed the money was short.

Yesterday at Edinburgh Sheriff Court, friends and family of the pair wept as the two men were led to prison for six months each.

The court heard how the pair had been going about their usual duties last Friday, and had visited a number of branches of the RBS to collect secured boxes containing money from the day’s business.

It was expected that at the end of their day, they would deposit the money at the bank’s head office at South Gyle in Edinburgh.

But halfway through their rounds, Drummond discovered that one of the plastic carrying cases – which held £60,000 made up of £5,000 bundles – was burst open.

Instead of depositing the box into the safe section, to which neither had access, Drummond told Docherty, and they decided to take a £5,000 bundle each.

Their collection work continued and at around 5pm that day, the two guards went to drop off the money with the main bank.

But officials at the bank grew suspicious after they noticed immediately that one of the cases was short of a substantial amount and police were called.

When Docherty and Drummond retruned to their Group 4 base, they were searched and bosses found £5,000 in Drummond’s rucksack.

Thinking this was the extent of the theft, the search stopped there, and it wasn’t until Docherty hinted to police that they might not have found all the money that his belongings were checked.

When they searched his bags, they found a further £5,000.

Andrew Gilbertson, defending both men, told the courts that his clients had gotten greedy and when they opportunity had arisen they had foolishly taken it.

He said: “The greedy part of them had taken over because they were having financial difficulties.”

And he reminded the court that a full recovery of the money had been made. They admitted the theft immediately.

He asked that community service be given instead of jail time.

But Sheriff James Scott deferred said despite their good records a custodial sentence was the only way to deal with what he described as a “gross abuse of trust”.