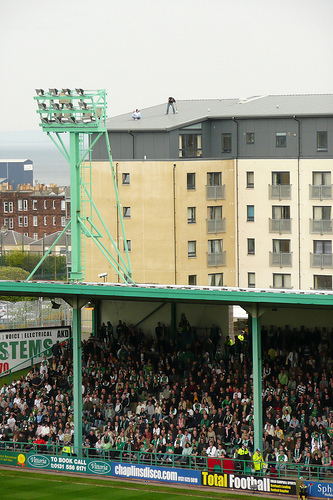 TWO daredevil fans scaled a 100ft block of flats next to Easter Road so they could enjoy a bird’s eye view of the match below.

The daring duo sat on the precarious roof of the eight-storey apartment block during Hibs’ match against Rangers on Sunday.
Hibs fans watched in amazement as the pair nonchalantly walked across the roof before sitting down and dangling their legs over the edge.
The brazen twosome then proceeded to down bottles of beer before tossing their empties to the ground below.
Frank Dougan, secretary of the Hibs Supporters Trust, watched in disbelief from his seat in the stand opposite.
He said: “It was really horrendous and a scary thing to watch. They weren’t only putting themselves in danger but also the other people in the block.
“The roof looked really slippery so it wouldn’t have taken much for one of them to have an accident.
“At half time they even went away and came back with a carryout – I couldn’t believe it.
“The daft thing is they could only have been able to see half of the pitch as the East Stand would have blocked the nearside.”

The flats are part of Westpoint Home’s Visio development at Hawkhead Close.

The building firm bought the land from Hibs’ holding company, HFC Holdings, for £10m in 2004.

A police spokeswoman said the pair were ordered down from the roof after concerned supporters pointed them out to officers.

She said: “As there was concern that they may fall, one of our officers went up and spoke to them and they came down.

“No charges have been brought against the pair.”

Jo Stagg, of the Royal Society for the Prevention of Accidents, said: “Football fans going to extreme lengths to see a match is nothing new.

“However we cannot condone people going into areas in which they do not have permission to be.

“A fall from this kind of height would almost certainly have tragic consequences.

“One of our primary concerns related to instances like this is that younger children, who do not have a full understanding of all the risks involved, might try to copy what they have seen others doing.”

A Hibs spokesman refused to comment on the incident.