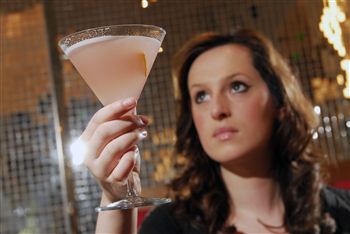 A COCKTAIL in honour of Sex and the City’s Carrie Bradshaw has been created by a top mixologist.

The Bradshaw – a concoction of vodka, raspberry liquer and lashings of luxury sparkling wine are topped with an edible flower – is paying homage to the release of Sex and the City: The Movie.

Mixologist Jamie MacDonald came up with the luxurious drink to coincide with the glamour of the New York-based blockbuster.

And the tipple – launched as part of style-bar group Montpeliers’ ‘Summer in the City’ event – was crafted to grasp the essence of the much-idolised character played by Sarah Jessica Parker.

He said: “I wanted to create something that could rival the Cosmopolitan in capturing the glam girly culture. Women love cocktails and drinking something that is both refreshing on the pallet and on the eye.

“That’s why I used Rocco Prosecco wine and topped it off with the flower – it is small touches like that which make drinking cocktails all the more exciting than simply ordering a spirit and mixer.”

The drink will now sit alongside other Sex and the City classics including Cosmopolitan and French Martini in bars across Edinburgh.

And during the event, cocktail drinkers could even get the chance to jet off to the Big Apple and take in the cities hottest nightspots, just like Carrie and her friends.

Jamie, head mixologist at the Tigerlily bar, said: “With all our ‘Summer in the City’ cocktails we have been keen to make sure they are drinks associated with the goings-on in Sex and the City. This means our customers can have a taste of the NYC lifestyle in Edinburgh even if they aren’t the lucky one to win the prize to New York.”

As well as a four-day trip for two to New York, drinkers could also win a host of other glamorous prizes including underwear that super-stylish Carrie wears in the film.

The grey romper suit with ribbons, by designer Lakes and Stars, is from Edinburgh lingerie boutique Boudiche and is worth £165.

David Johnston, development manager at Montpeliers, said: “We are absolutely delighted to be offering our customers the chance to live it up like the Sex and the City girls.

“Edinburgh is a very glamorous city and the ladies love the designer lifestyle. But nothing can beat NYC itself – it will be the trip of a lifetime.

“The film is soon to hit cinemas and the summer is upon us – it is the perfect time for girls to slip into their Manolos and sip on one of Carrie’s favourite tipples.”