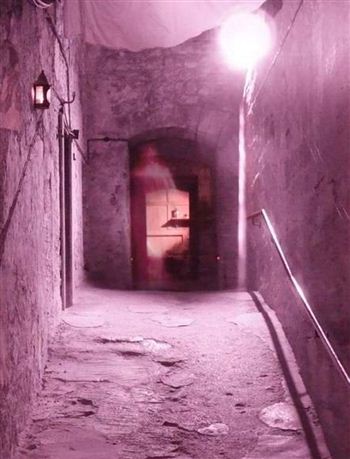 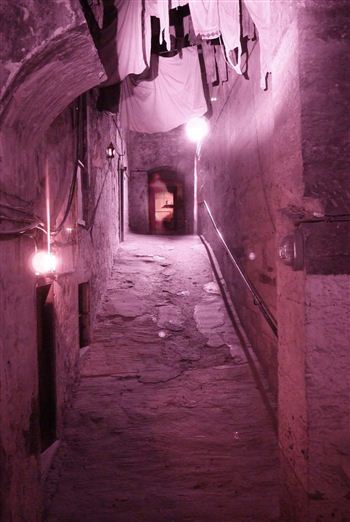 A GHOSTLY figure has been captured on camera in a famous underground street – sparking excitement among paranormal investigators.

The snap appears to show a large outline hovering in the doorway at the top of Mary King’s Close in Edinburgh.

An electronic voice phenomena (EVP) was also recorded at the site and in it investigators are told by spirit voices to ‘just get out’.

Experts – including former Most Haunted presenter Richard Felix – said the footage is among “the best examples of this kind of phenomenon”.

Mary King’s Close lies underneath Edinburgh city centre and has become a popular tourist attraction thanks to reports of ghoulish goings-on.

But until now no evidence to back up its claim to be the most haunted spot in the capital has ever been produced.

The attraction was empty and general manager Stephen had only activated the camera to check the computer system had been switched off for the night when he spotted the ghostly image.

Mary King’s Close spokeswoman Lisa Helsby said: “There’s a trigger for the camera on the wall and we usually press it last thing at night to check that everything has been switched off properly.

“We’d had some events for the Ghost Fest on this particular night, and when they’d finished, Stephen pressed the button before coming back up into the office.

“He was the only person down there and wasn’t in the shot himself, so it was a total surprise when the image came through.

“If everything had been switched off properly the photo wouldn’t have been taken at all, so it was a complete fluke. It’s not been tampered with or altered in any way – it’s exactly what was taken at that moment in time.

“It definitely looks like a ghostly person in the distance and we’ve had quite a few visitors who have mentioned seeing a heavy-set figure in that location before.”

The photo has since been shown to a number of paranormal investigators who are currently working on research in the capital.

Richard Felix, the former host of television show Most Haunted, deemed the picture as “convincing”.

He said: “My first impression was that it could have been someone else on a tour in the close, but I’ve been assured that it was taken when it was deserted.

“I don’t think it has been doctored and it’s one of the best examples of this kind of phenomenon that I’ve come across during my career.

“It’s especially interesting because the figure appears to have the same dimensions as other apparitions reported there over the past few years. However, I think that they need to send it away to other experts for analysis before you can comprehensively say it is a ghost or not.”

Mark Turner, a paranormal investigator with Ghost Finders Scotland said the infra-red camera could pick up light the human eye could not see.

He added: “The most successful results for paranormal research appear to come when filtering out all other light except infra-red, and this photograph clearly shows a large figure appearing in a doorway.”

The investigations going on at Mary King’s as part of their annual Ghost Fest have stirred other paranormal activities.

When Richard Felix went down into the close with Ghost Finders Scotland – experts in EVP – digital recorders picked up clear spirit voices.

One of the loudest of these was recorded in the house of Andrew Chesney, the last resident of the Close, who vacated his house under duress from the City authorities in 1897.

One of the staff asked ‘Are you sick of seeing us yet’ and the reply came back ‘yes I am!’

In another recording, staff asked “Would you like us to leave here now?” and a spirit voice replied: “Just get out!”