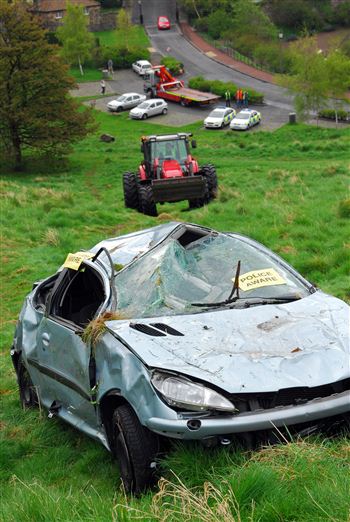 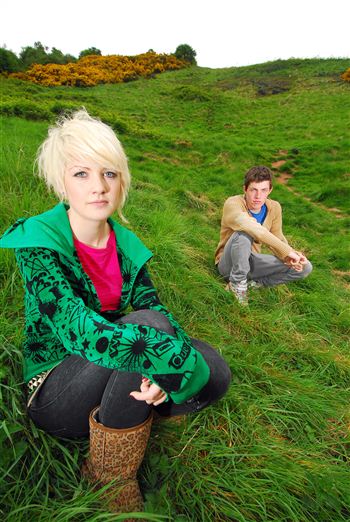 THE traumatised passengers of a car which plummeted 450ft down a hillside have revealed the driver only passed his test the day before.

Last night, survivors of the crash spoke for the first time about their ordeal and told how the novice skidded off the road as he joked about having their lives in his hands.

The driver and three passengers miraculously escaped with just cuts and bruises following the harrowing accident.

Now Lindsay Mutch, 22, and Callum Townsley, 19, have described the events which led to the terrifying smash on Arthur’s Seat in Edinburgh.

The drama started when a friend of the couple, Alex Callaghan, 22, invited them to join him at party.

After they agreed, Alex said Dave Gunn, 18, would pick them up as he was desperate to drive after passing his test the day before.

Callum, from Edinburgh, said: “The car belonged to Dave’s mum and he had only been put on the insurance hours before after passing his driving test the previous day.

“Lindsay and I sat in the back of the car with Alex in the passenger seat.  We were joking that Dave was usually the one who was drunk so it was strange that he was the sober one for a change.

“I then said it was mad to think that our lives are in the hands of Dave.  At this point he turned around to laugh with us when Lindsay suddenly screamed ‘Dave’ but it was too late.”

The novice driver had lost control of the Peugeot 206 and ploughed straight into an angled rock on the roadside which acted as a makeshift ramp.

The car hurtled through the air, clearing a metre high fence, and crashed landed 40-feet down the hillside.

It then flipped over several times before eventually thundering to a stop – 410 feet further down the hill.

Callum said: “After we hit the rock there was suddenly a silence as we flew through the air.

“There was then a massive thump as we hit the ground.  The car then kept tumbling over and over and we were all screaming.”

After the car eventually came to a stop, Lindsay, from Edinburgh, managed to open her door and clamber out.

She said: “Luckily we was facing the right way up and the door just opened as normal.

“We all got out and no one seemed to have any injuries expect for a few cuts and bruises.

“Then suddenly my neck seized up and I had to sit down, I totally froze – I must have been in shock.

“Someone called the emergency services who arrived at the road below the hill after just a few minutes.

“I still couldn’t move so the fire brigade climbed up and attached ropes to me to help me down to the bottom.”

The group were all taken to Edinburgh’s Royal Infirmary and kept in overnight except for driver Dave who didn’t require any medical attention.

Callum realises they had a very lucky escape and says he won’t be getting in a car with Dave anytime soon.

He said: “They say you are meant to see your life flashing before you in near death situations but I didn’t – it’s as if I always knew we’d be okay.

“However after visiting the scene a few days later it’s a miracle none of we’re seriously injured or killed.”

The accident happened on May 1, just hours before dozens of revellers were due to climb the landmark as part of the Beltane Fire Festival.

The road was closed off for several hours as the damage car was removed from the hillside.

Callum added: “The mad thing is you can actually see my dad’s house from where we came off the road so he would have been able to hear the crash.

“It must have looked like a scene from the Dukes of Hazard.”