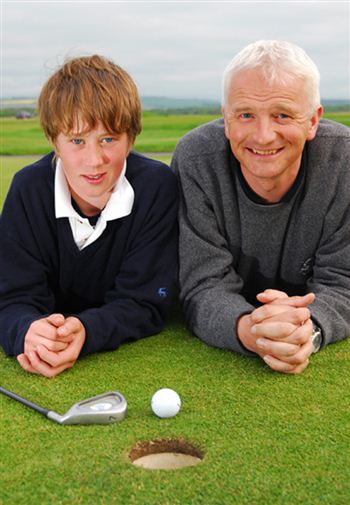 HUNDREDS of the world’s best young golfers are to descend on Scotland for the first ever European tournament for elite juniors.

Dozens of Scots kids will be among the vast field of seven to 14-year-olds from 34 different nations hoping to become the next Tiger Woods.

The event will see young Scottish players pit themselves against players from across the world from India to Hawaii.

The influx of parents, coaches and supporters of the prodigies will also give the local economy a significant boost.

It is the first time the US Kids Golf Foundation, an organisation started in 2001 to boost youth golf in America, has held an event in Europe.

If the tournament is a success it’s set to be held in Scotland every year.

The East Lothian courses at Gullane, Craigielaw, Kilpindsie and Luffness will play host to the three-day, Ryder Cup style, competition from May 27.

Founder and president of U.S Kids Golf, Dan Van Horn is confident the success of similar tournaments in America will be repeated here.

He said: “Our experience shows that golf’s popularity shows no age barriers or geographic boundaries.

“The European Championship is an exciting opportunity to bring positively reinforced, high-quality competitive events to youngsters around the world.

“We believe this tournament will be an inspiration for youth golf throughout Europe and especially Scotland.”

Gullane Golf Club pro, Alisdair Good, has been instrumental in the tournament coming to Scotland and says staging the event here was, as the Americans would say, “a no-brainer”.

Alisdair, who has been voted as one of the top 50 golf coaches in the world, says that simply registering a score at the three-day tournament could be enough to catch the eye of scouts.

He said: “Golf is not a subjective sport, you don’t have to see a player to know they are playing well – the scores speak for themselves.”

As well as local players, some of the best young golfers from around the world will be making huge round-trips to compete.

Gullane youngster Duncan Maclean will be one of the homebred hopefuls teeing off.

Duncan, 12, playing off a 15 handicap knows he is not among the favourites to win the tournament but hopes home advantage and a sense of perspective will help him enjoy the experience.

He said: “It will be good to play people from other countries but I really just want to play under my handicap – that is the only goal I have really set myself.

“I like golf because it needs discipline and consistency, Alisdair has really helped me with that, and my swing.”

Maxwell Martin, a 10-year-old player from Warwickshire with a handicap of 9.7 is a tournament regular, and has won many British titles including the HSBC Wee Wonders Championship.

He represents one of Britain’s best hopes in the tournament while Ciera Mia, a 12-year-old girl, will travel more than 8,000 miles to get to East Lothian from Hawaii.

And brave Demetri Kotsovolos will compete in the tournament despite a three-year battle against cancer since he was diagnosed at the age of just five.

He said: “Like U.S. Kid’s Golf, Alasdair is committed to helping kids learn the game of golf, and the good things golf can teach young people that can last a lifetime.

“We couldn’t have found a better partner than Alasdair who clearly understands what golf can do for kids now and in the future. He is truly among the best teachers of the game.”

Local politicians have welcomed the event and have described hosting the tournament as a “win-win situation”.

Neil Rankin, councillor for North Berwick, said: “It’s good for tourism, good for the kids and good for golf.

“It is going to be brilliant for the hotel and restaurant owners and the whole area in general. We can’t wait.

“We do well with golfing tourists anyway, but you can never have too much.”

Mr Rankin said the youngsters in the area never ceased to amaze him and added that the tournament was the perfect chance for them to display their talents.

He said: “They play with no inhibitions, and so much enthusiasm.”