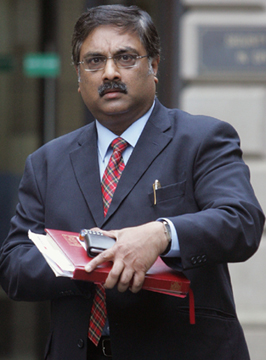 AN award-winning restaurateur has been banned from running food businesses after he admitted a catalogue of sickening hygiene breaches.

When council officials inspected Herman Rodrigues’ Suruchi restaurant they were disgusted by the conditions they found, including mouse droppings littering the premises.

Inspectors also discovered bags of food gnawed open and water from a burst waste pipe all over the floor.

Rodrigues was the sole director of Indi Foods Ltd – which was fined £1800 in 2006 after inspectors uncovered similar breaches at the restaurant, including a cockroach infestation.

At Edinburgh Sheriff Court on Friday, May 30, he pleaded guilty to five charges brought against him after Suruchi was found to be breaching food hygiene regulations.

The 47-year-old director has now been banned from running any restaurant without the permission of the court.

The court heard that during a routine inspection of the Edinburgh restaurant, environmental health officers discovered extremely poor hygiene standards in the kitchen. Water from a broken drainage pipe had leaked onto the floor and caused a puddle.

When they examined storage spaces at the Nicolson Street restaurant, they found rodent droppings all over surfaces where glasses were kept and dishes were washed. Bags of food had been chewed open by rodents and were sitting out on a shelf, and the ice machine was covered in dirt.

The court was shown pictures of Rodrigues’ restaurant which were taken by health and safety officers in April 2006. Environmental health officers closed the restaurant immediately after the April 25 inspection and it remained closed for four days.

Rodrigues also voluntarily closed the restaurant in August 2002 under similar circumstances, but the case never came to court.

Yesterday, Sheriff John Allan handed Rodrigues an indefinite hygiene prohibition – meaning he is banned from running any businesses in the food sector until the court say otherwise.

He also demanded details of Rodrigues’ finances after the businessman claimed to earn just £300 per week – despite running a bed and breakfast.

Sheriff Allan warned the man not to pretend he couldn’t afford to pay up and added: “I don’t like having to extract information like this. I would be surprised if he didn’t have some savings in an account.

“I want a full and frank disclosure of his financial circumstances and if that doesn’t happen I will fine him in line with what I think is the case.”

His defence lawyer, Massimo Dalvito said that Rodrigues had suffered over the publicity surrounding his restaurant.

Suruchi was named Patak’s Best Indian Restaurant in Scotland for 1996 and Rodrigues was thought of as one of Scotland’s most innovative restaurateurs after introducing haggis pakora and Scottish salmon nan bread to his menu.

Councillor Robert Aldridge, Environment Leader, said: “Residents and visitors to Edinburgh are entitled to expect the highest standards of food hygiene when they go out to eat in the city. Thanks to the vigilance and hard work shown by our Community Safety staff in bringing this case to court, we can send out a clear message to all food business operators that they must adhere to food hygiene requirements or face the consequences.”