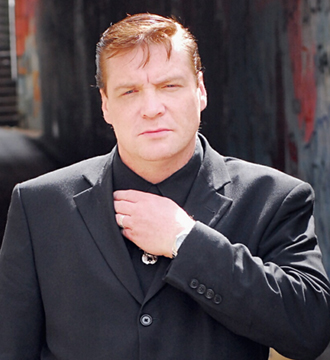 The former Death Row con says he loves driving and this is the only way he’ll be able to do it while getting paid.

Big-kid Richey says he’s been getting plenty of behind the wheel practice playing racing games on his Xbox.

The ex-US marine says his ideal car would be a Jaguar but he is happy to settle for a ‘Green Machine’ in the meantime.

He said: “I want to become a bin man as you get to drive one of those Green Machines – I love driving.

“It’s the most likely job I could do where I am able to get behind the wheel.

“When I was in the Marine Corps I used to drive light-armoured vehicles.  Now the closest I get is a racing game on my Xbox.”

The distinctive Green Machines can be found in every major capital in the world.

Falkirk-based Applied Sweepers Limited have produced over 10,000 of the sweeping machines, which can be seen in 300 cities across the globe.

Richey, from Edinburgh, says he has a couple of stumbling blocks to overcome before he can start cleaning the city’s streets though.

He said: “I have been seeing a psychiatrist who has been helping me to adjust since I got home.  I’ll start working when he gives me the okay to do so.

“I’ll also have to get my full licence, I only have a provisional right now.

“I can drive fine but would need to brush up before taking my test – it’s been over 20 years since I sat behind the wheel.

“My dream car would be Jaguar – that’s a fine British motor.”

Richey has struggled to adapt to freedom since his release and was recently exposed as having a steamy affair with a 16-year-old schoolgirl, Louise Turnbull.

He launched an astonishing tirade against her dad Alastair Turnbull declaring: “I’ll beat him like a bitch.”

Richey says he is determined to fix his broken relationship with ex-wife Wendy Amerud who read about his affair on the internet at home in America.

He was freed from Death Row in January after agreeing a plea bargain to quash his conviction for the murder of two-year-old Cynthia Collins.