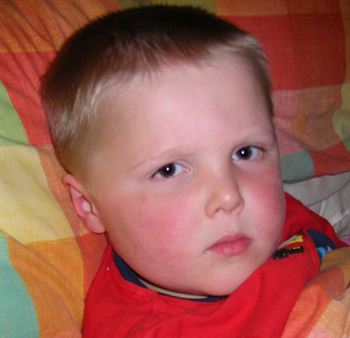 A three-year-old boy was killed after apparently pulling concrete bollard on top of himself as he played at the Royal Highland Show.

Onlookers said Ben Craggs was beside the 2ft pillars in the car park when one fell in and landed on him at around 1.30pm yesterday.

It is thought the tot had swung on a chain holding two concrete pillars together pulling one of the bollards down on top of himself.

Paramedics rushed to the scene and took the tiny child to the Sick Kids in Edinburgh, but he died shortly after from serious head injuries.

Ben’s parents, Jonathan and Dawn Craggs, of Sedgefield, County Durham, who were exhibiting livestock at the Edinburgh show, were last night too upset to comment.

But other family members paid tribute to a “beautiful little boy”.

Relative Mary Craggs, of Stockton-on-Tees, said: “It’s an absolute tragedy for all the family. It just seems to be a terrible accident, and he was in the wrong place at the wrong time.

“A member of our family spoke to Jonathan this morning and, as you would expect, he is totally devastated.

“Ben was a beautiful little boy, and I don’t think the enormity of it all has really hit home yet.”

The tragic incident has shocked visitors to the launch of one of Scotland’s most iconic events, expected to attract over 150,000 people over the weekend. 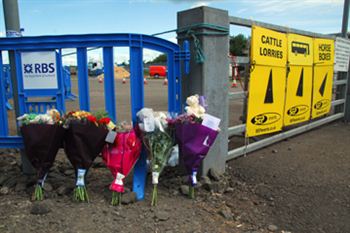 Liam McGee, 19, who was working in the event’s car park when the tragedy occurred, said the youngster had been playing alone.

He said: “It looked like he was on his own at the time because I couldn’t see his parents anywhere.

I didn’t actually see the accident but I was close by. I heard the child was playing between two unattached concrete bollards which were roped together. He pushed the rope downwards and the bollards keeled over and landed on top of him. Another attendant told him he the child had bitten through his tongue – it’s pretty horrendous to think about.

He added: “Security were going mad trying to keep the public away from the area so the ambulance could get through. The crew worked on him for almost an hour before taking him away.”

And Agnes Turner, 64, who was visiting for the day from Galashiels, added: “It’s such a terrible thing to have happened. I hate to think what his parents are going through. Everybody at the show is talking about the accident and the rumour is that the boy was a member of a farming family who have a stall at the show.”

The scene of the accident was immediately blocked off with blue fences and tarpaulin and guarded by a solitary policeman.

Robert Doig, a security officer at the show, said: “I was near to the scene when the accident happened and rushed over to help. He was in quite a bad way but I didn’t really think he would die.

“It’s such a terrible tragedy to happen and all the staff here are devastated. We put some flowers down this morning as a mark of respect, it’s the least we could do. We are all thinking of his family.”

Now Lothian and Borders Police are appealing for witnesses to help them piece together exactly what happened.

At the scene, Inspector Alan Duthie said: “A tragic accident took place around 1:30pm this afternoon. A three-year-old child was playing near to some concrete bollards and suffered serious injuries. We are still unsure as to what exactly happened. The child was taken to hospital but unfortunately succumbed to his injuries. We are appealing for witnesses to come forward and get in touch.”

A police spokesperson added: “The circumstances aren’t entirely clear yet, but he appears to have hit his head while playing at concrete bollards.”

Ray Jones, Chief Executive of show organisers Royal Highland Agricultural Society of Scotland said: “This has been a tragic accident and our thoughts are with the child’s family at what is obviously a very difficult time. The matter is now in the hands of the police and investigative authorities with whom we are cooperating fully.”