Crossing the road is child's play for local kids 084 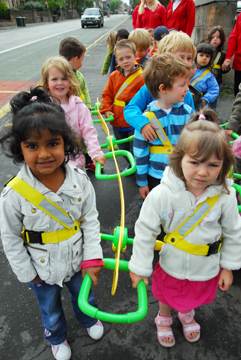 WALKING to nursery has never been so much fun for a group of Edinburgh toddlers.

The kids at a city nursery have a new pal to hold hands with, and it’s getting them heaps of attention.

Designed by a Scottish school teacher, the Walkodile gives child carers peace of mind when taking classes out and about.

Crossing busy roads has become child’s play for the city centre nursery thanks to the British invention of the year.

The poignancy of Child Safety Awareness week came into focus last week when 3-year-old Ben Craggs was killed by a falling bollard in the Ingliston car park.

Around 65 children from Strawberry Hill nursery in Newington as well as its sister nurseries were at the show the next day using the Walkodile.

Lyndsay Grant of Bertram Nurseries, who own Strawberry Hill, said: “Some parents were a bit anxious about us taking their children to the Highland Show the day after the tragedy.

“It’s a busy place and if a child becomes lost, sadly we all know what can happen.

“But this is the safest way to take groups of children out and about, and they love it, it’s like a new toy.

“We get beeped by cars and have sing songs while we all walk, so it’s turned walking to the library, duck pond or swing park into a fun part of the day. They love the attention.” 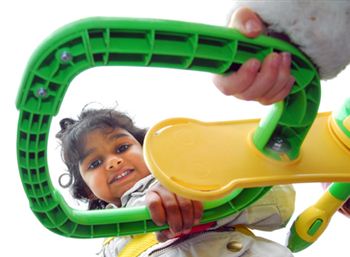 The clip-in harnesses make it quick and easy for children to join the Walkodile, and if anyone falls over, the bendy design means other children are unaffected.

The idea came from Peterhead teacher Elaine Stephen, and won her European Woman Inventor/Innovator of the Year 2007.

Strawberry Hill is one of 17 schools in Scotland owned by Bertram Nurseries who decided to invest in Walkodiles, which retail at £200 each.

“It also allows us to take the curriculum outside without a second thought, keeping the children fit, healthy and very safe.”

The invention won praise from First Minister Alex Salmond, who said he was “very impressed by the concept.”