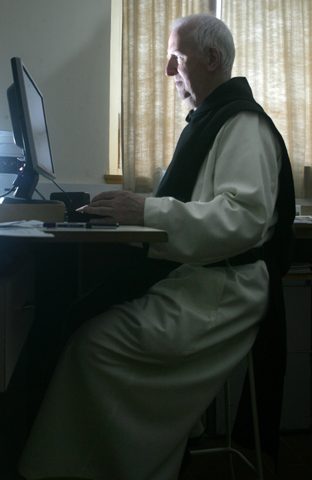 A RETIRED monk fell victim to internet fraudsters when his online blog was hacked.

International criminals used the identity of 74-year-old former abbot Dom Donald McGlynn in a bid to scam money out of hundreds of people in his treasured address book.

They used his email account to send out a desperate plea in his name, claiming he had been robbed of his return plane tickets in Quebec, Canada.

The hoax emails asked for $2800 to be sent to a Canadian bank account, to help Dom Donald fly home.

In fact, Dom Donald says he has “never been to Quebec” and is keen to warn others of online dangers.

Monks at the Sancta Maria Abbey near Haddington, East Lothian, were inundated with phonecalls from people who had received the email, worried for Dom Donald’s welfare.

He said: “The first thing I knew about it was when a friend phoned to tell me he’d received this email saying I’d been mugged in Canada.

“I said that can’t be from me, I’ve never been to Quebec!

“He said to get in touch with police, who put me through to their fraud squad, who then put me in touch with MI5. I was very surprised.

“All they could say was that these scams were happening very often now.”

The former monk had no choice but to delete his Yahoo email account, along with 900 contacts’ email addresses.

He said: “It had taken over 10 years to build that contacts book up, but I thought safety should come first.

“This hasn’t put me off the internet though. It’s a great tool for research and keeping in touch with friends and relatives.”

Dom Donald, who spent 33 years as abbot, stepped down from the role in 2003, to take over the role of master at the neighbouring guesthouse at Garvald.

He joined the order 54 years ago and continues to live alongside the 17 other monks at the abbey, the only Cistercian community in Scotland.

He was in charge of establishing the Our Lady of Angels Cistercian Foundation in Nigeria, where he officially blessed a newly-built monastery and was even made a tribal chief in thanks.

His successor as abbot, Dom Raymond Jaconelli, said: “We had dozens of calls from people receiving these e-mails. Thankfully, no one fell for it.”

A spokesperson for Lothian and Borders Police said: “Organised criminals hire computer hackers to take over email addresses and send out these kinds of messages.

“They probably found the abbey website and decided a monk would be a trustworthy figure to use.”