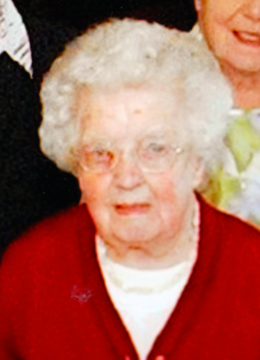 A POPULAR schoolteacher has stunned friends and family by leaving over £1 million to charity in her will.

Martha Calvert – who taught Sir Fred Goodwin – passed away in December last year aged 96, and her recently published estate has revealed the true extent of her wealth.

Miss Calvert, an only daughter, and brought up in Renfrew, was an outgoing and admired figure in the Paisley community.

And although the philanthropic OAP lived a fairly frugal lifestyle – including never owning a television – her bequest reveals extensive gifts to charities, family and friends.

The three charities and organisations that received over a million in donations between them were the ex-Servicemen’s nursing home Erskine Hospital in Bishopton, the Accord Hospice in Paisley and Glasgow University.

Close friends have spoken of their shock at the extent of Miss Calvert’s savings.

Shipping Executive Capt. Robert Logan, 63, a family friend, said: “Martha was a really good friend of my late mother, and had actually been a bridesmaid at her wedding.

“She was a very private, but a very interesting person to know.

“Right up until her last couple of months Martha’s mental prowess and agility was second to none. I think it might have to do with all those crosswords she loved doing.”

But he insisted that the pensioner was not flashy and showed no signs of her secret fortune.

He said: “She led a very simple life, and the only outward sign of her wealth was when she treated herself to a yearly holiday.

“I was extremely surprised to find out she had left as much as £1 million in her will.

“I knew she liked to study the stock market, but it looks like she knew more about it than she let on.”

Capt Logan also revealed Miss Calvert never even owned a television set throughout her long life preferring instead to either read or listen to the radio to receive her news.

Up until her death last year, the retired school teacher was a lively, sociable pensioner who regularly attended her local church, was a keen crossword enthusiast and who loved to tend to her beloved garden.

Miss Calvert was seriously injured in a freak accident when a fridge-freezer fell on top of her and she died days later.

Born on April 4, 1911, she first arrived at Paisley Grammar School in 1941 and, despite the hardships that the Second World War brought, taught geography at the school for the following four years.

Despite a shortage of materials, disruptions caused by air-raids and potato holidays, the popular teacher was said to have taught her classes calmly and competently.

As a youngster, the spinster had attended Camphill School in Paisley, before going on to complete an MA degree in English, History and Geography at Glasgow University.

Miss Calvert then completed her teaching training at Jordanhill College of Education in Glasgow, before her career led her home to Renfrewshire.

After a spell lecturing at Jordanhill College between 1947 and 1952, she returned to Paisley Grammar where she remained until retiring in 1976.

Former pupils of Miss Calvert who have gone onto make a name for themselves include Sir Fred Goodwin, Chief Executive of the Royal Bank of Scotland and ex-Sunday Times boss Andrew Neil.

Blessed with remarkably good health, Miss Calvert retired from teaching in 1976 and enjoyed a long and happy retirement during which she extensively travelled abroad, attended concerts and socialised with her many friends.

The retired school teacher also drove regularly until she was around 80 years old, but decided to give up after having her car stolen outside a Paisley supermarket in the early 1990’s.

Friend, and ex-teaching colleague, Lea Allan, 80, said: “Martha was an extremely likeable person who was a great friend to me, as well as being an excellent teacher.

“She always spoke very eloquently and she used to attend our school reunions almost up until her passing.

“She’ll be sadly missed by our entire group.”

Lorraine Ross, Erskine Hospital’s Director of Care, said “Every year, Erskine cares for over 1,300 veterans young and old and, without the support of people like Mrs Calvert, we would not be able to offer  the care that our ex-Service men and women so richly deserve.

“Leaving Erskine a gift in your will is one of the best ways in which you can show your support for the men and women who have served their country with bravery and courage.

“This money will directly benefit the veterans and will help to maintain the high standard of care, allowing our residents to live as independently as possible.”