Richey given US passport – despite ban 082 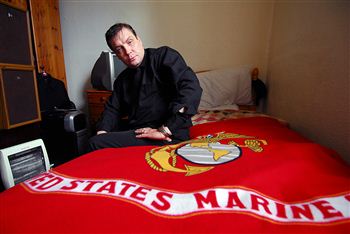 US immigration officials have given Kenny Richey an American passport allowing him to enter the country – even though he is banned from visiting with his British one.

The former Death Row Scot’s criminal conviction means as a UK resident he isn’t allowed to go the country.

But as Richey, 43, is a dual UK/US citizen, he has been granted an American passport meaning he is free to enter the country.

He now plans to travel to the States and see his family as well as fiancée, Wendy Amerud, in a bid to patch up their tattered relationship.

After realising his criminal past would prevent him being granted an entry visa, Richey decided to taken advantage of his dual nationality.

The smug ex-con said: “I knew I wouldn’t be allowed in because of my criminal record so decided to apply for a US passport.  Being half American had to have a use some time.

“I’ve been sent it now so I can go over and no one can do anything to stop me.  I really hate that country but I have to put that to one side so I can see my family.

“I want to give my son Sean a big hug and hold my grandkids for the first time. I want to visit my father, who is dying from cancer, as he doesn’t have much time left.”

After being freed Richey got engaged to ex-wife Wendy Amerud who was planning to move to Scotland to set up home with the ex-con.

However a string of sleazy sex scandals have now put that in jeopardy.

He said: “When I am in America I’ll be visiting Wendy to hopefully sort things out.”

Richey, from Edinburgh, won’t be visiting Putnam County where he spent 21 years on Death Row.  As part of his plea bargain he was banned him from entering the area for five years.

Speaking of the expected backlash from Amercians he fumed: “I’m sure they won’t like it, but they can kiss my Scottish ass.

“No words can describe how I feel about that country and its corrupt legal system – to say I hate that country would be an understatement.”

A US Embassy spokesman confirmed: “In general terms, except for specific circumstances, all American citizens may be issued a US passport.

“The circumstances when one may be denied or restricted are detailed in the Code of Federal Regulations (CFR).

“While being the subject of an active warrant is a bar to passport issuance, having been convicted of a past crime is not.”

His mother, Eileen Richey, last week begged her son to sort his life out after underworld gangsters targeted her home.

Richey was freed from Death Row in January after agreeing a plea bargain to quash his conviction for the murder of two-year-old Cynthia Collins.

No court appearance for Kenny Richey