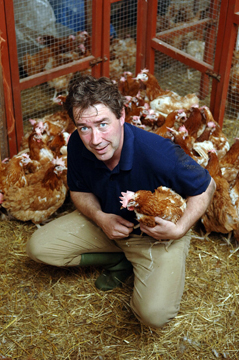 A HEN re-homed after being saved from the slaughterhouse has been returned to the charity that rescued it – because it kept attacking its new owners.

‘Hannibal’ was one of over 600 chickens picked up by the Battery Hen Welfare Trust last weekend as the charity saved the lucky birds from being made into animal food.

But after being taken to her new home, Hannibal was so distressed she kept biting her new owners as they tried to feed her.

The family has now been forced to hand her back to the charity claiming they cannot keep control of the vicious hen.

Last Saturday, 628 battery hens were delivered to farm near Callander, Perthshire to experience their first taste of freedom.

Scores of animal-loving families from all over the country arrived to collect between two and 12 hens each, much to the delight of the charity’s Scottish co-ordinator Jim Duff.

He said: “We managed to re-house all 628 hens last week, but unfortunately one family was not too happy with their bird.

“When they got home, they tried to get near Hannibal to feed her but she kept lunging at them and trying to peck them.

“Hens might be quite small, but their peck can be really painful.

“Since she came back to us, there has been one occasion where she went for the dog.

“The other hens know to keep well away from her, but apart from that she has been as good as gold.

“As I’ve got a few hens myself, I’ve decided to keep her.

“As a rule, I don’t tend to name them but after witnessing her vicious streak, we’ve christened her Hannibal Peckter.”

Battery hens lay up to 320 eggs per year for the first two years, but that average drops drastically as the hen gets older.

The two-year-old hens are usually sold on for dog and cat food for as little as 20p each, and are subsequently replaced by the farmer with a new, younger model.

Instead of sending them to the abattoir, the Battery Hen Welfare Trust (BHWT) buys up as many of the birds as possible and gives them away to caring bird-lovers in exchange for a small donation. 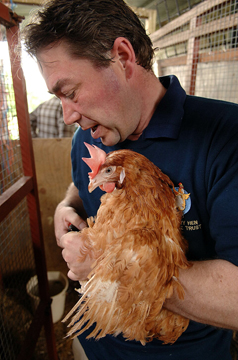 Mr Duff said: “The main aim of the BHWT is to see a diminishing demand for eggs from caged hens and to increase the demand for free-range and organic.

“We are staunch supporters of the British egg industry and support all farmers within the egg industry.

“We fully understand the financial constraints farmers are under and are no way criticising them.

“We are also very happy to pay the farmers the going rate for the hens.”

The charity was set up in 2005, and was initially established in order to raise awareness of the 20 million hens currently kept in cages in the UK.

Jamie Oliver, a patron of the Trust, said: “The BHWT has passionately defended the farmers believing they’re just stuck between a rock and a hard place.

“I don’t want to rant at the farmers either, it’s more about encouraging people to buy from stock that’s been reared as naturally as possible.

“From now on, when you buy your eggs have a look at the box to check they’re free range and feel free to ask at restaurants about the type of eggs they’re using.”

“Some people have no shame”. Thieves raid stall run by enterprising girl, seven