AN up and coming rocker has gone partially blind after headbanging too much at a gig.

Richard Allan, 21, felt his eyesight go blurry after his show on Friday night and assumed he had been dazzled by stage lights.

But the bass player has actually torn his retina as he jumped around the stage to the heavy metal tunes.

Now the wannabe rockstar – who plays with his band The Day I Vanished – faces emergency surgery and the possibility of wearing an eye patch.

Richard, from Penicuik, said: “I guess I do go a bit mental at gigs, we all leap about the place and headbang because we love our music, but I never thought it would make me start to go blind.

“I was at the bar after the gig and noticed things were blurry, and thought I’d maybe been looking at a light for too long.

“At hospital the next day they said I’d need an operation, which is a massive shock as I’ve never had a proper operation before. But I’m made of tough enough stuff to get through it.” 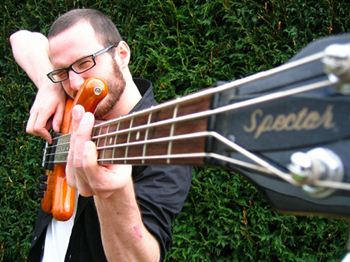 After the gig at the Hive in Edinburgh, doctors at Princess Alexandra Optimology Pavilion diagnosed Richard with retinal detachment, and told him his vision will deteriorate even after the op.

The band are due to kick off a full UK tour this Friday, including some lucrative gigs in London – and Richard has vowed to battle through it, even if he has to be a lot calmer on stage.

They’re no strangers to the London limelight, having recently recorded their EP at Animal Farm Studios with producers Mat and Ville Leppanen, the men behind chart toppers as diverse as Dizzee Rascal and Shakin’ Stevens.

Once he’s had his operation, Richard says he hopes to be “back on the road in no time.”

He said: “I’ll have to sleep on one side and have been told not to read or play computer games, which really sucks! The upside is that it gets me out of driving duties while we’re on tour.

“I’ll have to wear and eye patch and calm down a bit onstage, so it could be a new look for the band.

“The Day I Vanished’s logo is a pirate ship, so maybe we’ll all dress up like pirates so my eye patch doesn’t look stupid.

“I just have to have faith in science and the NHS so I can still rock out with the band, but just not as violently as before.” 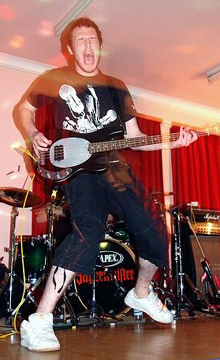 The eye injury leaves Richard in doubt over his day job with a bank, as he has been told not to stare at computer screens for lengthy periods.

He added: “I’m hoping more than ever that the band gets signed, because it’s the only career I enjoy that doesn’t involve computers!

“If Stevie Wonder can play music while blind, then I can too. Losing your eyesight in one eye is more inconvenient than a complete hindrance, so there’s no way I’ll stop.”