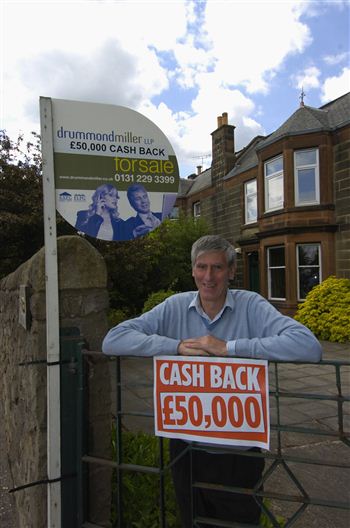 By Douglas Walker
A DESPERATE house seller who offered a £50,000 cash incentive to the potential buyer of his home is set to take it off the market after receiving no offers.

Malcolm Young, 57, used the ploy in an attempt to lure in buyers after his house failed to attract any interest.

Mr Young is one of many homeowners suffering as a result of the credit crunch which has beset the country.

As a result he has had to shelve his plans of relocating his family to Northern Ireland where he had landed a new job.

Mr Young’s Edinburgh home is a semi-detached stone villa in a quarter of an acre of grounds, with four public rooms and four bedrooms.

Mr Young, a business psychologist, said: “It still has not sold. The offer still stands, but it has not increased levels of interest.

“It’s surprising but it’s obviously related to the fact that all houses are difficult to sell at the moment.

“I’m going to keep it on for a wee while longer and if it does not sell in the short term I will take it off the market and wait and see if the market changes.”

People in homes at the higher end of the market had been largely protected from the worst effects of the credit crunch.

It has been a frustrating time for Mr Young, and his wife Yvonne, 45, as their house has been on the market for several months.

They had planned to go to Northern Ireland with their two young children but are getting used to the idea they will probably be staying in Edinburgh for the time being.

Mr Young said: “It’s one of those things, we’re pretty realistic about it. The disappointing thing is, as I understand it from estate agents, that house prices in Scotland have remained relatively stable, but it’s news from England, where things are worse, that is putting people off.”

Mr Young would be following the lead of many other sellers, who are choosing to sit it out and wait for the market to improve, rather than make concessions.

David Marshall, business analyst at ESPC, said: “Sales volumes in June 2008 are down 50 per cent compared to June 2007 so, while the top end is still performing better than the bottom end, it is not anything like as strong as in previous years.

“We don’t envisage a return to anything like a ten or 15 per cent growth in the short or medium term.”