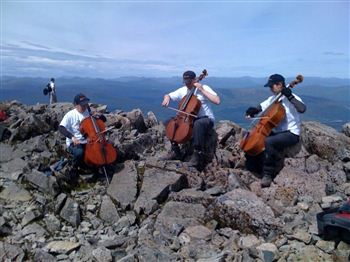 THREE cellists who specialise in playing in extraordinary places have completed their most challenging task yet – playing on top of Ben Nevis.

The Extreme Cellists performed at the top of Britain’s highest peak as part of their Four Peak challenge, where the novice climbers are attempting to scale the heights of the four tallest mountains in Scotland, England, Ireland and Wales.

The intrepid trio aim to raise more than £10,000 for their chosen charities – the spinal cord injury charity Aspire, and the mountain rescue services in each of the four countries.

Jeremy Dawson, 32, Clare Wallace, 42, from Sheffield, and James Rees, 28, from Cambridgeshire donned their climbing boots and strapped on their cellos on Monday afternoon and hiked their way up to the summit of the 4,406 ft mountain.

On Thursday, the three musicians will then attempt to climb Scafell Pike in the Lake District, before scaling Mount Snowdon on Sunday and Carrauntoohil in County Kerry next Wednesday.

Mr Dawson, a university lecturer, said: “We had an amazing day climbing Ben Nevis. It took over 4 hours to get up because we had to carry our cellos as well, but it really was worth it.

“We’re all feeling a little bit sore this morning after our efforts, and believe it or not we are all suffering from a bit of sunburn today.

“I first got the idea a number of years ago when I saw a programme about Extreme Ironing. It looked like fun and we just adapted the concept to suit us.

“Hopefully we can reach our target of £10,000 by the time we complete the last mountain.

“We’ve been involved with Aspire for a while now, and, because of what we are doing, we thought the mountain rescue services should receive a donation as well.”

Based in Sheffield, the Extreme Cellists have also played in other unusual circumstances for charity over the past few years.

In 2006 the trio embarked on the Cathedral Roof Tour where they played on the roofs of all the 42 Anglican Churches in England in less than two weeks.

Andrew Ogierman, of the charity Aspire, said: “We have had the pleasure of being associated with the cellists for a few years now and we all think they are attempting a marvelous feat.

“After their Cathedral tour we knew they were planning something big, but this event just tops the lot.

“Hopefully we can raise some more awareness for their cause because the money donated to ourselves and to the mountain rescue teams will be very welcome indeed.

“The money they will raise will help make a huge difference to the 1200 people affected by spinal injuries every year.”