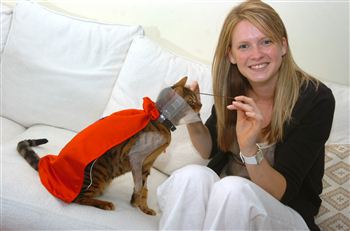 A CAT who dresses as Superman plunged 65ft from a balcony – and survived.

Lucky Basil could have been killed in the fall from the top-floor flat after he landed just inches from metal railings.

But the two-year-old Bengal cat – whose owner Debbie Standen made him a Superman cape to wear around the house – walked away with just a broken leg.

Now Debbie, 23, says she can’t believe he imitated his favourite superhero and managed a PURRfect landing.

She said: “He always loved his Superman cape – perhaps he thought he had super powers. This was more like a scene from Spiderman than Superman because he landed feet-first.

“He has only ever jumped off the windowsill before, so for him to jump off the balcony was one hell of a shock.

Debbie made him the cape out of the same material of his favourite cushion, after he was moulting fur over their furniture. 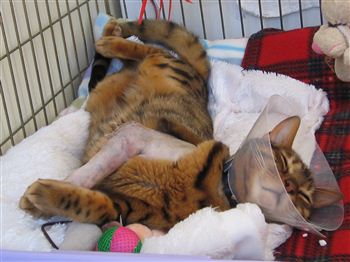 Debbie’s partner was on the phone but still heard the thud from outside their Edinburgh flat.

The couple ran out to the balcony, but couldn’t see their beloved moggy.

Debbie, a PR officer, added: “Basil loved sunbathing in his cape but he’s not the brightest of cats and isn’t very streetwise.

“We were expecting the worst when we were rushing down the stairs. I love Basil so much and was really worried for him.

“It was absolutely unbelievable to see him walking and meowing. He wasn’t even concussed.”

Debbie said he won the hearts of all the nurses at the vets, who fondly named him “Supercat.”

Vet Alistair Marks said: “He is a very lucky cat. We certainly could have been dealing with injuries that could have claimed his life.

“I think he probably broke his paw by hitting a piece of furniture on the way down.

“We just need to wait and see if there’s any nerve damage.”

Now home two weeks after his ordeal, Basil is recovering after having his stitches from the surgery removed.

But he won’t be acting out any more scenes from his favourite superhero movies.

“Not in a million years will he be getting to go back out on the balcony.

“Neither of us wants to go through that again, but we hope to move to a place with a garden soon, so Basil can jump around all he likes.”