They had been tipped off by a disgusted flat-mate who was looking for music on a shared computer system when she stumbled across the vile movies.

Milne, who was studying divinity at Edinburgh University, told police he did not know anything about the illegal files, but may have downloaded them during “a period of memory loss”. 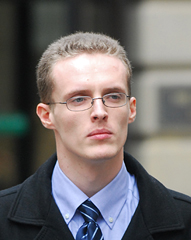 But yesterday at Edinburgh Sheriff Court, the “straight A” student was jailed after he admitted he was fully aware of what he had done.

He will also be placed on licence for two years when he gets out and will have to sign on to the sex offenders’ register.

The court had earlier heard how Milne, of Stirling, had been sharing a flat with three other people in Nicholson Square in Edinburgh.

The four had set up a wireless internet connection to allow each computer internet access, and through this, the flatmates could access each others’ media libraries to share files.

Last February, while Milne was using his internet connection, a female flatmate logged on.

She accessed his media library and was sickened when the titles of four movies in the folder appeared to be of a paedophilic nature.

Although she could not view or download the films, she was concerned enough by the names and went to the police to report him immediately.

Cops searched the plush flat, seizing all of Milne’s computer equipment and taking it to the forensic computer unit to be examined.

They discovered four video clips – one had been temporarily deleted and the other three were stored on the computer’s unallocated space.

Two of the movies were classed as the second highest level on the copine scale – used to assess the seriousness of the material.

His lawyer, Euan Cameron, said his client was “disgusted” by his actions, which he now admitted, and no longer had private access to internet.

He said: “He accepts full responsibility for what he has done and the implications of proliferating abuse for children.

“He is disgusted at his actions and is remorseful.”

Mr Cameron said his client had “taken substantial steps towards putting his life back on track” and had moved back in with his parents.

He asked that Sheriff Gordon Liddle, who branded the videos “filthy material”, consider placing the first offender on probation.

But Sheriff Liddle said only a custodial sentence was appropriate and said because of the explicit nature of the files, he had considered a much longer period.

He said: “Rather than a still image where it appears that a child is being abused it is quite that what one views on a video is the most repulsive thing actually being done to a child.

“It is an absolutely appalling thing for anyone to be participating in or subscribing to.”