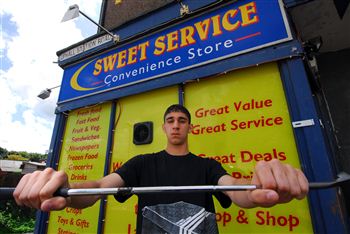 A YOUNG shopkeeper fought off a vicious knifeman on his very first day in the job.

Ikky Arishad, 17, had only been working in his uncle’s convenience store for a couple of hours when the knife-wielding thug stormed in demanding money.

But the brave teenager ignored the large weapon and got rid of the robber by bashing him over the head with a metal bar.

The robber then stumbled back crashing into an ATM machine before fleeing the scene on Thursday evening in Pumpherston, West Lothian.

The attempted robbery happened just days after Ikky – from the Midlands – arrived in Scotland for a family visit.

Ikky said: “I was really keen to help out in my uncle’s shop for a few hours and they agreed not thinking anything like this could happen. It all happened as we were closing at about 9.30pm.

“The guy came in and shouted ‘Give me all the money’ but I called his bluff and said no way. I wasn’t going to give it up without a fight, no matter how big the knife was.

“I then spotted a metal bar under the counter and grabbed it. When the robber lunged at me with the knife I whacked him over the head with the bar.

“Looking back on it, I’m not sure if it was a brave or a stupid thing to do, but it certainly did the trick.”

Ikky’s uncle Ali Arashad, 34, who owns the Shop and Save store, added: “We can’t believe this has happened on Ikky’s very first day. We have never had problems like this before.

“The family are all so proud of him, it takes a certain type of person to do what he did. There wasn’t much cash in the shop at the time and we are really thankful Ikky is unharmed.”

Brave Ikky said the robber was aged between 15 and 18, was left handed and had piercing blue eyes.

He was described as wearing a grey/black camouflaged jacket with a hood and attached sand mask with dark coloured goggles, black tracksuit bottoms.

Despite being shaken after the attack, Ikky insists it won’t put him off coming back to Scotland for visits.

He said: “I love coming to Scotland and this won’t put me off. Most people are really friendly towards me and this type of thing can happen anywhere.”

A Lothian and Borders police spokesman said: “We can confirm an attempted robbery took place at a shop in Pumpherston,  West Lothian at around 9.30pm on Thursday evening.

“The clothing of the attacker is very distinctive and hopefully someone will recognise the description.

“Anyone who witnessed this incident or has any information is requested to contact Livingston Police Station.”