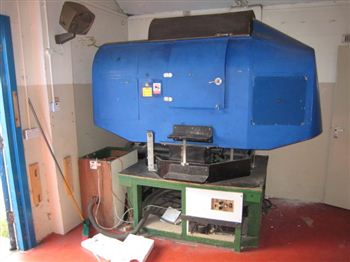 A WWII flight simulator has been discovered lying abandoned in a hut due to be demolished to make way for a city tram system.

Officials from Transport Initiatives Edinburgh (TIE) found the historic machine after buying the land from the Air Training Corps.

The 60-year-old simulator is believed to have been used to train cadets for battle during the last World War.

It will now be moved to the Montrose Air Station Heritage Centre where it will go on display to the general public.

The land where the simulator was stored in is in the west of the city, close to the Edinburgh Airport, and had been kept in the premises used by the 287 (Stenhouse) Squadron of the Air Training Corps.

The C-8 Instrument Flying and Landing Trainer is still in complete working condition, save for a few adjustments to the large valves.

It is thought to be only the third of its kind ever discovered in Scotland, and was developed by the RAF as an alternative to ‘blind training’ pilots, where the pilots would fly planes while wearing a hood.

During WWII, the simulator was also used to teach all phases of elementary and advanced instrument flying, including radio navigation, instrument landing systems and voice procedure.

Jon Monk, a project manager with TIE, the council-funded body responsible for the new tram system, admitted they had no idea the simulator was in the hut when they acquired the land.

He said: “When we acquired the ATC building we were not expecting to find something of such historical significance, so it was exciting to find the flight simulator.

“I believe it is one of a very small number of WW2 flight simulators left in Scotland and what makes it even rarer is its excellent condition.

“I am glad that we are able to help the ATC preserve the device and move it to its new home in Montrose, where it will eventually go on display to the public to be enjoyed by generations to come.”

The one and a half ton simulator is currently being dismantled and will be stored at the Air Corps base at Kirknewton, West Lothian, before eventually being moved to its new home in Montrose.

Flt Lt Frank Wielbo, of the Air Training Corps, said: “The simulator was discovered after the building was sold on to make way for the new tram system in Edinburgh.

“It looks like the simulator was made around 1940 and we still have the complete original manual to refer to. It’s a wonderful piece of machinery, and is still in very, very good condition.

“It is almost completely intact apart from a few valves and the plotting table, but they should be easily fixable.

“Hopefully in time everyone will be able to go and see the simulator in full working order.”