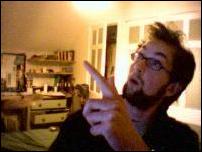 THE FATHER of the Scottish student who has been arrested in China following a protest at the Olympic Stadium has backed his son’s actions.

Brian Thom said his son Iain, 24, had planned to carry out the protest “for some time” before he left for Beijing last week.

And he said his distraught family were hoping to be able to speak to Iain as soon as possible.

Mr Thom, 53, said: “He had discussed the protest with us some time before he left and the whole family back him completely.

“Now we are just manning the phones and trying to get an update on what is happening with him.”

Iain, a graduate of Edinburgh University, travelled to the games last Tuesday with other members of Students for A Free Tibet (SFT) to hit out at China’s human rights record.

The protesters scaled a 120ft lighting pole early in the morning and unfurled banners reading “One World One Dream Free Tibet” and “Tibet will be free”.

They timed the action to coincide with the arrival of the Olympic torch in Tiananmen Square in the early hours of yesterday (Wednesday) morning.

Mr Thom said he and wife Betty, both from the Inverness area, had been keeping their daughter Aileen, a student at a university in Glasgow, up-to-date over the phone but had heard nothing from Iain himself.

He said: “It will be nice just to get a few words with him if we can, that is the first thing we are looking toward.

“We haven’t made any plans to go out there as yet, but if it is required we will be there.”

Mr Thom said Iain would be “very happy” with the attention he has focussed on China’s human rights record, adding that his son would most likely be in good spirits following the arrest.

Yesterday, Victor Spence, General Secretary of the Edinburgh Interfaith Association, held a protest outside the Chinese Consulate in support of his colleague Iain Thom.

The Foreign Office confirmed that Iain had been arrested and that they were negotiating with Chinese authorities for access to him.