THE hotel suite where JK Rowling completed the Harry Potter series has become a Mecca for fans across the world – at almost £1000 a night.

Renamed in the author’s honour, the luxurious room still contains the marble bust she triumphantly signed after completing the final book.

Formerly known as simply room 552 in The Balmoral Hotel, Edinburgh, it became the ‘JK Rowling Suite’ after she completed Harry Potter and the Deathly Hallows there. 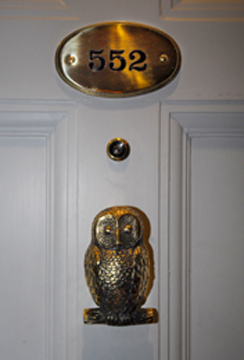 Since then affluent fans from across the world have made the pilgrimage to see where the series was finished.

Readers of the books have regularly visited the Edinburgh cafes where Ms Rowling wrote the first novel, Harry Potter and the Philosopher’s Stone.

Now, seven books and millions of sales later, The Balmoral provides another, if extravagant, stop-off for Harry Potter fanatics.

Despite living in Edinburgh, Ms Rowling, 42, chose to complete the final book in one of the hotel’s grand suites in January last year.

Upon completion she celebrated by scribbling a victorious message in black marker on a marble bust of the Greek god Hermes.

She wrote: “JK Rowling finished writing Harry Potter and the Deathly Hallows in this room (552) on 11th Jan 2007.”

Sensing its worth, hotel staff quickly removed the statue from the room and it was kept in safe keeping by the hotel’s general manger, Debbie Taylor.

A couple of months later it was returned to the room but in the safety of a protective glass case.

Following the release of the final book in July last year, the hotel decided to rename the room ‘JK Rowling Suite’ after receiving permission from the author.

A brass plaque was attached to its front door and the standard doorknocker was replaced by a finely crafted brass owl in homage to those featured in the books.

The rest of the room is exactly how Ms Rowling left it and has now become an extravagant location for the more sophisticated tourist.

An unnamed worker at the 168-bedroom hotel, said: “The room was renamed following the launch of Harry Potter and the Deathly Hallows.

“As JK Rowling finished her book in this suite we thought it would be a nice way to honour this.

“The room is exactly the same as when Ms Rowling finished her book there.

“Fans from across the world book the hotel and specifically ask for the suite.”

The suite is 55 square metres in size and includes the writing desk used by Ms Rowling as well as the queen size bed she slept in.

A marble bathroom ensures guest can enjoy a relaxing bath following a hard day’s Pottering about.

Guests enjoy spectacular views over Edinburgh’s skyline with the hotel offering an unpacking service as well as a private dinner menu.

However the luxurious surroundings come at a cost – £965 per night to be exact.

One Harry Potter fan club offered exclusive trips to stay in the suite for the midnight launch of the final book on July 21 last year.

Melissa Anelli from eminent Harry Potter fansite, ‘The Leaky Cauldron’, says all readers of the books would love to see where it was all ended.

She said: “That room means a lot to fans, it’s where the series came to an end.

“It’s wonderful to see the hotel recognising that emotional connection to so many millions of readers.

“Already fans visit the cafes where she wrote in the early days – now, any fan would love to stand in there, if just for a moment, and think, ‘this is where it happened’”

The Harry Potter book series has sold 375m copies worldwide and has also spawned five blockbuster films with the sixth instalment, Harry Potter and the Half Blood Prince, due out this November.

Ms Rowling has amassed a personal fortune of an estimated £560m making her richer than the Queen.

Last night a spokeswoman for the author and The Balmoral Hotel both refused to comment on the matter.