A MAN bit off his girlfriend’s nose in a drunken prank because he was “bored,” then calmly carried on drinking while she bled.

David McDonald, 42, chewed off Lorraine Allan’s septum and spat it out before turning back to the booze.

But he avoided jail yesterday on “humanitarian grounds”, because the sheriff took pity on a long-term leg injury which made him wheelchair bound. 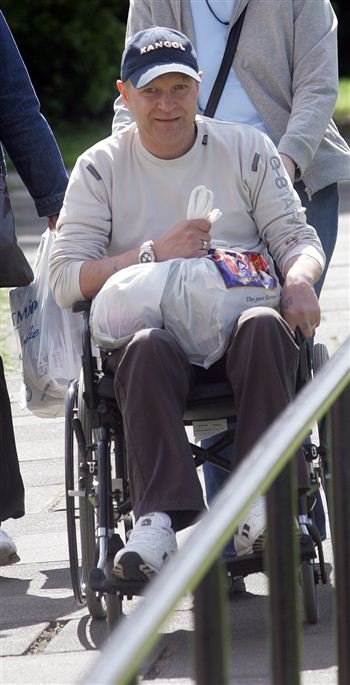 Edinburgh Sheriff Court heard how McDonald had been drinking at a bar in the city before the attack.

Once at the flat in Muirhouse, he kept drinking and started arguing with Miss Allan, 45.

After heated exchanges he leapt from his chair, sinking his teeth into his girlfriend’s nose.

He chewed at her septum, the small piece of cartilage which links the tip of the nose to the upper lip, and spat it out on the ground.

Despite Miss Allan’s nose gushing with blood, McDonald grabbed his booze and carried on drinking.

An ambulance was only called when it became obvious she needed treatment to prevent massive blood loss.

Paramedics stitched Miss Allan’s nose but despite their pleas she refused to go to hospital for emergency surgery.

The couple are no longer together and McDonald, of Restalrig House, Edinburgh claims he has had nothing to do with her since the attack in September last year.

His defence agent told the court: “It seems his issue of alcohol abuse is borne out of boredom.

“He spends most of his time in his house not doing anything.

“He is genuinely ashamed of his behaviour, which resulted in a portion of Miss Allan’s nose actually being removed.”

Sheriff Kenneth MacIver said he would have jailed McDonald if he wasn’t so severely injured.

He told McDonald: “What I’ve decided to do, largely because of the length of time you’ve spent in a wheelchair, is to avoid sending you to prison today on humanitarian grounds.

“A probation order will keep you under control and if you commit an offence while on probation, then I don’t think it requires much imagination what’s going to happen to you.”

McDonald was sentenced to two years on probation, during which he must do 100-hours of unpaid work in the community and get alcohol rehabilitation treatment.