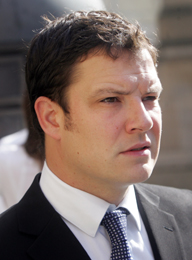 AN EMERGENCY worker who pointed his camera phone at a patient’s private parts as she lay half-naked in the back of his ambulance has been jailed for four months.

Scott Jenkins, 30, laughed at the girl as she lay with her trousers and underwear around her ankles during the humiliating prank.

The father-of-two jested that the 25-year-old patient looked like “a badly packed kebab.”

And although his colleague was unsure if a picture was actually taken, she was so disgusted that she reported him to bosses at the Scottish Ambulance Service, who immediately suspended him and called in cops.

The whistleblower was yesterday (THURS) praised by the sheriff who sent him down.

Sheriff Andrew Lothian described the incident as “one of the grossest breaches of trust possible.”

His lawyer said Jenkins was “ashamed” of his actions, which had “a devastating effect on his family.”

But when Sheriff Lothian was told that some ambulance colleagues had signed a letter of SUPPORT for Jenkins, he threw down his pen.

He bellowed: “That is one of the most distasteful aspects of this whole case.”

Sick Jenkins, of Balfron Loan, Edinburgh, initially denied the charges of sexual breach of the peace at Edinburgh Sheriff Court, but was found guilty during a trial last month.

During the day-long trial last month the court heard from Ruth Anderson, a 28-year-old technician who was originally sent to treat an unconscious girl.

She and paramedic Paul Laing, 41, arrived at Holyrood Road in Edinburgh during the early hours of Sunday February 10 in a small response unit.

They found the girl in an unresponsive state and asked for an ambulance to attend and Jenkins arrived along with a partner.

But when the woman – thought to be drunk – said she needed to urinate and pulled her trousers and underwear down to her ankles Jenkins made an inappropriate joke about the patient’s privates.

She told the court: “Scott Jenkins made a comment saying ‘For f*** sake check out that, it’s like a badly packed kebab.’”

Miss Anderson said she then saw Jenkins stood up with his mobile phone held out in front of him, in a horizontal position as if to take a picture.

She said he was crouched down and had it pointed at the stricken girl – who still had her bottom half exposed.

The girl – who has not been traced – stirred and then got up and left the ambulance.

But after speaking to a colleague, Miss Anderson decided to make a formal complaint and Jenkins was suspended and charges were brought against him.

His defence agent, Mr McNair, said Jenkins now realised why she reported him.

He said: “He is under no illusions of the gravity of the offence of which he was convicted and presents himself as genuinely regretful.

“He takes responsibility for his actions, accepts such behaviour can’t be tolerated and that Miss Anderson was right to complain to the police.

Sheriff Lothian praised Miss Anderson for “doing the right thing when everyone around her was not”.

Sentencing him to four months’ imprisonment, he said: “You were only in this lady’s presence to help her.

“If it was not for the good sense of one of your colleagues to speak out, this would have been swept under the carpet and forgotten about.

“This is one of the grossest breaches of trust possible.”

Jenkins’ wife burst into tears as he was led away, and had to be helped from the court room by friends.
A spokesman for the Scottish Ambulance Service said: “Disciplinary proceedings were already convened prior to the outcome of the court proceedings. These will now be brought forward.”