A DISABLED man has spoken of his terror after he was punched to the ground by two girls as he made his way home.

Cerebral Palsy sufferer David Wilson, 45, was walking along a pathway near to his house when he was set upon by the teenage thugs on Tuesday night.

The girls shouted abuse at the terrified man before punching him and leaving him lying on the ground in the Oxgangs area of Edinburgh.

Although he was not seriously injured, David says he now feels like a prisoner in his own home because the attack has made him terrified to go out.

Speaking from his home, he said:  “I’m scared to leave my house now. I used to go to Livingston 14 miles away but now I can’t even go 14 yards outside my own home.

“I just didn’t expect this kind of thing to happen to me just outside my front door.” 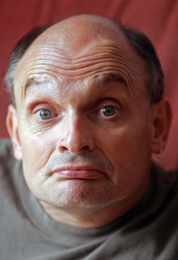 David, who is studying part time for a social sciences degree at Napier University, has lived in his home with his wife Lindsey for the past 19 years.

But he says this isn’t the first time he has been terrorised by young people and he believes he is deliberately targeted because of his condition.

On one occasion whilst working at his desk, he had steel ball bearings thrown at the windows of his house.

He said: “Because I’m disabled these kids behave like I’ve got no rights and they think it’s acceptable to torment me. When is it going to stop?

“I’m not being ageist but nowadays there are no boundaries. To these young folk anything goes and nothing is off limits.”

Police are now appealing for witnesses to the “terrifying” assault.

A Lothian and Borders police spokeswoman said: “This has been a terrifying ordeal for the man involved.

“Although not seriously injured, he has been left understandably traumatised as a result of this unprovoked attack in his own neighbourhood.

“We know there were a number of people in the area at the time, and are appealing for anyone who may have witnessed the incident to come forward.”

One of the girls is described as being white, 14-16-years-old, around 5ft tall, of slim build with shoulder length blonde hair.

The other girl is also white, 14-16-years-old of slim build.

Inspiring youngster awarded for work in cleaning up local community

Fury as woman severely disabled by cerebral palsy has care cut from 22.5 hours a day to just nine.