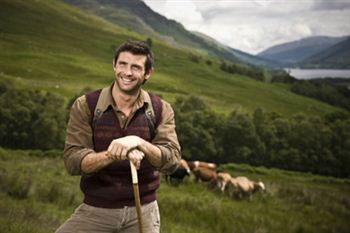 ONE of Scotland’s best loved characters has been stripped of his kilt – in an effort to appeal more to English customers.

Out goes the kilt and white t-shirt look, and in comes beige trousers and a brown shirt accompanied by a smart tank top.

But Nationalists have described scrapping the kilted image as “odd”.

Recently revealed figures showing Scotch Beef sales in Scotland down by one per cent over the past three months have prompted the beef model’s transformation.

All beef sales in Scotland have slumped by eight per cent over the same period.

But sales of Scotch Beef are bucking the credit crunch trend down south with sales up a massive 12 per cent on last year, compared with non-Scottish beef sales which have slumped by 6.5 per cent.

The new advertising campaign will be launched in London next month and a Scotland-wide campaign will kick off in November in time for St Andrew’s Day.

Laurent Vernet, QMS Head of Marketing, said: “We’re constantly carrying out research into consumer attitudes and what we’ve spotted is that their primary concern as far as meat is concerned is reassurance on why they should pay more.

“So we’ve changed Glen’s look to send out a message to them that when they’re buying Scotch Beef this is exactly what they’re getting, a 100 per cent natural product complete with unique guarantees on production standards all the way from farm gate to dinner plate.”

Scottish Nationalist MSP Aileen Campbell said: “It seems odd that they would withdraw from using such an iconic Scottish symbol at a time when it is having a positive impact on sales south of the border.

“I would have thought keeping a hunky Scotsman in a kilt would help increase sales.

“After all the kilt is the height of fashion these days.”

The beef makeover also sees the advertising slogan changed from ‘Tastier than Ever’ which accompanies the old tartan look, to the new ‘Great Quality of Life’.

Ms Vernet added: “What our research shows is that people are staying in rather than going out to eat and when they do they want to eat the best quality beef.

“Scotch Beef is recognised as a premium product so when people are shopping for ‘entertaining in’ they’re choosing to buy it rather than cheaper, perhaps lesser quality meat.”

he character Glen is portrayed in both adverts by model, and ex-Scotland U21 rugby international, Chris Capaldi.

Capaldi, 29, is the ex-boyfriend of former Miss Scotland Nieve Jennings, and has recently been trying to break into acting after being given lessons by Jaid Barrymore, the mother of troubled Hollywood actress Drew.