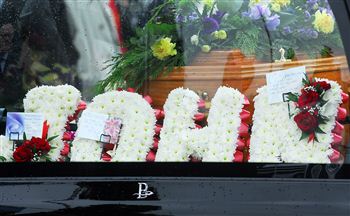 The MP for Glenrothes died last Wednesday, aged 60, after a two-year battle with lung disease mesothelioma.

Hundreds of family members and dignitaries packed out the small church, while dozens of members of the public braved the weather and lined the streets to pay their last respects to the popular MP.

Mr MacDougall’s wife Cathy arrived just before the ceremony, accompanied by her two children, Scott and Julie, and the late MP’s mother, Barbara.

The 45-minute service was conducted by family friend and retired minister, the Rev. John Allan.

During the private service emotional eulogies were read out by the Prime Minister, close friend and constituency manager Scott Brady and Mr MacDougall’s two children.

As the family and dignitaries made their way to their waiting cars, former First Minister Jack McConnell stopped to speak of MacDougall calling him “a great guy”

The funeral cortege then weaved its way through the rain-soaked streets to the nearby cemetery where Mr MacDougall was finally laid to rest.

The hearse was decorated with flowers that simply read “John”.

Among the dozens of mourners who had waited patiently in the rain was local man Harry McGilvarry.

He said: “I came along to pay my respects to John as he was a good friend as well as being an excellent politician.

“He was one of the few who really worked hard for his constituency and always pushed hard for what he believed in.

“It’s a sad loss for the area, but more importantly I feel so sad for his family.”

Mr MacDougall, a former leader of Fife Council, was first elected to the Commons in 2001.

The former boilermaker led Fife Council for nine years before taking over the Central Fife Westminster seat, held by Henry McLeish, who went on to become Scottish First Minister.

Mr MacDougall stayed on in parliament as MP for the new Glenrothes constituency after boundary changes in 2005, where his majority at the last election was 10,664.

He passed away at Victoria Hospital in Kirkcaldy on August 13.

Prime Minister Brown led the tributes to the admired father-of-two.

In a statement, the Prime Minister said he had lost a “good personal friend” who was a “true servant of the people”.

He said: “John MacDougall gave more than 30 years of distinguished public service to Fife – as a councillor, leader of the Fife council, convenor of Fife council and then member of parliament for Central Fife and he will be remembered as a true servant of the people.

“A very popular, diligent local member of parliament, he served Fife with great distinction in all the roles he played.

“In Fife he pioneered free travel for the elderly, led Scotland and Britain with nursery education for three and four year olds; was successful in pressing for new jobs and investment to replace thousands of jobs lost in mining and at Rosyth naval base, and was well known for his support for all local causes.”

Mr MacDougall’s death will trigger an unwanted by-election for the Labour Party, in a seat which neighbours Mr Brown’s Kirkcaldy and Cowdenbeath constituency.

A staunch supporter and ally of Gordon Brown, Mr MacDougall travelled to London to vote on Brown’s anti-terror laws just weeks after having a lung removed.

He joined the Labour Party in 1981, and rose to chair his local branch before being elected to Fife Regional Council.

He was a councillor in Burntisland for nearly 20 years and led the council between 1987-96, when he became civic convener of the council.

A passionate pro-European, Mr MacDougall was vice-president and treasurer of the Assembly of European Regions and developed the East of Scotland European Consortium.

Mr MacDougall was a passionate supporter of Raith Rovers football team and a lover of vintage cars.