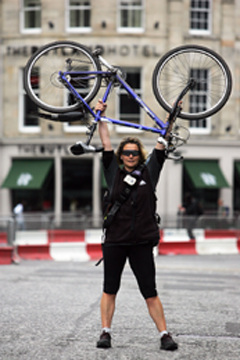 BRITAIN’S Olympic cycling heroes may be returning home exhausted following their efforts at the Beijing games, but for one cycle courier it’s all in a days work.

Because Eva Ballin can cover up to 80 miles on every shift – equivalent to an Olympian’s training regime.

The superfit 38-year-old took up the job with Eagle Couriers in 2000 after hearing of a friend’s experience and is now the only female doing the job in Edinburgh.

But modest Eva plays down her role insisting she could never go up against the likes of Chris Hoy or Nicole Cooke.

She said: “Hats off to the guys who cycled at the Olympics they were fantastic. Despite what I do there is no way I could ever compete against them. I wish I had gotten into cycling earlier because it is brilliant.”

And she added that to her the mammoth journeys are just part of the job.

She said: “You just manage because you need to. Normally the work takes your mind off the cycling and you’re just concentrating on getting the package delivered.

“The cycling is hard work but it’s also an ideal job to do if you enjoy being out in the open and keeping fit. I’ve had days where I’ve travelled 80 miles or so and it keeps me feeling fresh and energetic.” 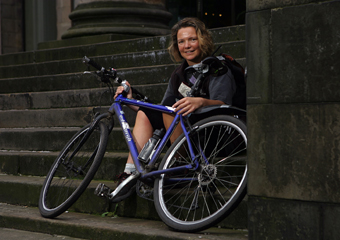 The courier – who came to the capital from Germany in 1992 to study English Language and German Literature – has previously played ice hockey at Germany’s top level and has been capped for Scotland internationally after receiving her citizenship.

And while she was studying she always used her bike as a way to get around.

Fiona Deas, Director, Eagle Couriers believes Eva is a perfect role model for any other women interested in taking up the job

She said: “Eva has been with us for eight years now and she’s one of the most experienced cycle couriers in Edinburgh. There are a lot of men employed in this profession, so it’s really good to see that she’s showing them all that women can be just as good at the job.”

Eva also works part-time as a fitness trainer and teacher to bolster her income.

And while she loves her courier job, she conceded that such part-time jobs are necessary to get by.

She said: “I did my degree in Edinburgh and, a few years after graduating, I studied for a PhD in German cinema.

“But I was disillusioned and bored, so when a friend of mine told me about a summer she’d spent as a courier in Berlin, I just thought it sounded fantastic.

“Originally I’d only planned to do the courier job for the summer months and then find another job, but it’s now been eight years and I still love it. It’s not the best paid job in the world, which means that I teach German part-time and do personal training and sports massage for extra wages, but it’s far better than working in an office all day.”

And while the internet has contributed to the downturn in business for cycle couriers, Eva believes there are some jobs that will always require a more personal touch.

She said: “It’s nice that, even though we’re sending so much information electronically through e-mails these days, there are still couriers on bikes being used to deliver letters and important documents.”