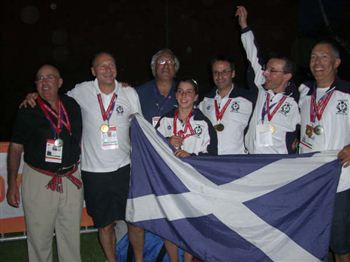 SCOTLAND will have its own team at the next Olympics – exclusively for Jews.

For the first time ever, athletes will proudly sport the Saltire at the Jewish Olympics in Israel next summer.

Fed up listening to political wrangling over whether there should be a separate Scottish team at the 2012 London Olympics, Scottish Jews have taken the decision to break away themselves.

Now 50 Jewish bravehearts are being sought for the 18th Maccabiah Games in July, touted as the third biggest sporting event on earth with 10,000 participants.

They said: “Chris Hoy’s three gold medals will inspire those in Team Scotland next year at the Maccabiah games.”

Athletes will compete in 30 different sports as diverse as chess, bridge and lawn bowls, alongside the traditional track, field and swimming events.

The breakaway from Team GB was “entirely mutual and friendly” according to the new Jewish Scotland squash team manager Alan Susskind.

“But to be honest I would prefer to be representing Scotland than Great Britain.

“The decision to break away was actually done with the support of Team GB, so there’s been none of the stuff we’re seeing in the papers just now.

“It was entirely mutual and friendly, which is what we expected.

“Getting the support of Alex Salmond and the SNP is terrific and we really welcome that.

“The debate for a lot of Jewish people now is to decide whether they want to represent GB or Scotland, but I for one am really excited about competing in Israel representing my country.”

Rather than spend four years competing in heats, Jewish Olympic hopefuls are simply being invited to join the Scotland team in Israel next summer by applying online.

He said: “Over the years I have seen the number of participating countries grow, and my wish has always been for Scotland to be one of them.

“It’s a fantastic opportunity for Scottish sportsmen and women to participate at the highest level of Jewish sport.

“The success of the Scottish competitors at the Olympics has lifted the country and in our own way we hope the Maccabiah will do the same.”

Unsurprisingly, Israel finished at the top of the medal table with 227 gold medals, while the United States was a distant second with 71 golds and Russia came in third with 15.

The Scottish Jewish football team are already in training ahead of the Olympic tournament next summer.

Footballer Danny Gardner has also represented GB in Israel, but can’t wait to wear a Scotland shirt for the first time.

He said: “I’ve played for GB in Israel before, but there’s nothing quite like the good old Scottish banter.

“Nothing can compare to being away with the lads and being part of your ‘home’ football team.”

An SNP spokesperson said: “Team GB have performed tremendously and the highlight for all Scots is undoubtedly seeing Chris Hoy grab that third gold medal.

“We are immensely proud of all our Olympians and I am sure their success will inspire those in Team Scotland next year at the 18th Maccabiah games.

“The Maccabiah games is one of the biggest sporting competitions in the world and it is great to see a Scottish team taking part for the first time.

“It is always good to see Scottish athletes taking part in any international competition.

“Small nations have showed that they can compete on the world stage and Scotland is no different.”