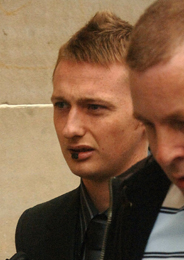 CELTIC star Derek Riordan has been banned from every nightclub in Edinburgh.

The former Hibernian forward was initially handed a one year ban under the Unight scheme after he allegedly abused staff at the city’s Berlin club when they refused him entry.

But within weeks of the ban, Riordan, 25, was spotted by bar staff at the Espionage nightclub in the city’s Victoria Street, causing his ban to be doubled to two years.

Bosses at Celtic have refused to comment on the situation, calling it a “personal matter”.

The police constable who has helped set up the Unight scheme has confirmed the footballer is among those handed with banning orders from all of Edinburgh’s nightspots.

PC Mark Pickavance said: “Riordan was banned for a year after an altercation outside Berlin. That was increased to two years after he tried to get into Espionage.”

Riordan was originally banned after an altercation outside the Berlin club in May this year.

Steven McLaren, a manager at Espionage, said: “Riordan managed to get into the club at about 11pm, but one of the bar staff saw him and knew he was banned.

“Our door stewards approached him to ask him to leave and they got a mouthful of abuse.

“He was going on about how they thought they were “big men” because they wanted him out. He claimed the ban had been served but we knew this wasn’t the case.

“It went on for a few minutes but he left before he had to be ejected. We don’t want him in Espionage.

“We stick very strictly to the Unight scheme for the protection of our staff and customers. It’s a great scheme.”

Riordan, who signed for Celtic in 2006 but has failed to make any impact, has been involved in a number of incidents in the past couple of years, some of which have led to him appearing in court.

He was found not guilty of involvement after a mass brawl involving up to 30 people erupted outside a pub in the Grassmarket in December, 2006.

He was also charged with breach of the peace two years earlier after he allegedly swore at police who were breaking up a fight in the city’s infamous Lothian Road area.

Again, the Scottish internationalist was found not guilty.

Riordan could not be contacted to comment, but his grandmother May Riordan said she did not believe he had been banned.

She said: “I could be wrong, as grandmothers only hear the good stuff, but that’s not like him.

“He’s a quiet lad and not a fighter. I’ve not heard anything about this.

“You always hear about trouble in nightclubs, but he wouldn’t be part of that.”

The Unight scheme, which can ban people from three months to life, has been branded “a great success” after 130 people have been prohibited from entering any of the city’s nighclubs.

The number of crimes reported in clubs from October 2007 to July has dropped from 1185 reported crimes to 936.

PC Pickavance said: “Unight has been a great success. We’ve seen a significant drop in crimes reported inside clubs and we’re keeping troublemakers out.”