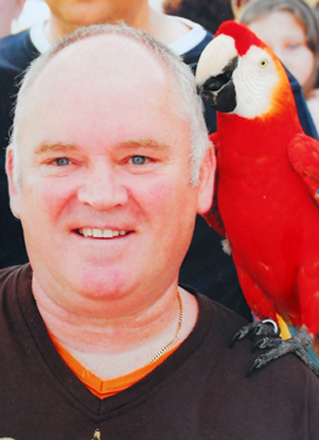 A community worker has drowned in the sea while attending a family wedding in Cyprus.

Caring Alex McGregor, 56, was enjoying a fortnight break on the Mediterranean island to see his niece tie the knot.

Tragedy struck just days after the ceremony when his body was discovered washed up on the beach.

Retired Alex, from Edinburgh, was a dedicated member of his community and devoted most of his free time to local projects.

Last night friends and colleagues paid tribute describing him as ‘simply the best’.

Alex had travelled to the Cypriot resort Ayia Napa for the wedding of his niece, Nicola McGregor.

Never married himself, he stayed in the same apartments as his two brothers, Colin and Billy McGregor, and sister, Lana McGregor, along with their families.

The ceremony took place half way through the two-week holiday with the whole family enjoying the break without incident.

Then a couple of days after the service, Alex went for his regular evening stroll around the town.  However when he didn’t return as normal, his concerned family called the local police.

It was then that officers told shocked relatives that Alex’s body had already been found washed up on shore.  An autopsy later confirmed he had drowned.

Alex’s family say he wasn’t acting out of the ordinary and are at a loss to explain how he could have ended up in the water.

They have struggled to find out exact details of what happened because of the language barrier.

Over 100 mourners attended the graveside service including many members of his local community whom he had helped over the years.

Alex regularly assisted pensioners with their daily tasks such as shopping and taking them to doctors appointments.

His auntie, Elizabeth Dailly, says the whole family have been left shocked by his sudden death.

She said: “Alex was such a nice, happy wee guy.  He was very close to all the family and was particularly fond of his late grandmother and mum.

“He was very attentive to both and did everything for them.

“Just a few weeks ago I mentioned to Alex in passing that I didn’t have my OAP bus pass.

“A few days later he came up to my flat and presented one to me – he’d sorted the whole thing out without me knowing.

“That was Alex for you – always thinking of other people.”

After leaving school Alex, from Edinburgh’s Dumbiedykes area, became a painter and decorator before working for the now defunct engineering firm, Ferranti, as an office clerk.

Latterly he worked in a hostel doing general maintenance work before ill health forced him to quit.

Most of his time was then spent looking after people in the community but he also enjoyed going to car boot sales and also loved watching Rangers on TV.

His cousin Jeff Stewart said: “He was very happy-go-lucky with a very dry sense of humour and was always cheery.

“He would do anything for anyone and was very popular in the local community.  There were over a hundred people at his funeral.”

Alex was vice chair of the Lochview and Holyrood Housing Association and was regularly invited to official functions including the Queen’s annual garden party at Holyrood.

Chairwoman of the Housing Association, Liz Walker, worked with Alex for ten years and says he was held in such high esteem that he was encouraged to run for council.

She said: “Alex was always there to give anyone a helping hand.  If someone was ill he would do their shopping and would regularly check on them.

“He had cared for one elderly woman, Gladys, for years and after her death last year the NHS wrote a letter thanking him for all the care he provided.

“Alex was also instrumental in our children’s garden project.  The kids used to run wild around the estate, smashing windows and daubing the walls with graffiti.

“Then Alex helped teach them all about gardening and their misbehaviour was virtually wiped out.

“He was thought of that highly by the local community he was asked him to stand for council.

“However he declined as he didn’t want to be in the spotlight and preferred to stay in the background.

“I will miss both as a colleague and also as a good friend – he was ‘simply the best’.

Alex’s brother, Andrew McGregor, 57, added: “He had a heart of gold and would do anything for anyone.

“He absolutely loved being part of the community and Edinburgh – he had four pictures of the castle up in his flat.

“We are struggling to come to terms with what has happened but are taking comfort from all the lovely things people have had to say about him.”

A Foreign Office spokeswoman said: “We can confirm a British national drowned in Cyprus on August 10, 2008.

“We are providing consulate assistance to the family.”

Newlywed couple ‘flew out to Cyprus on £2.2k honeymoon to be told TUI cancelled hotel without telling them’