The Edinburgh cyclist says he wanted to play football for the Jambos as a youngster, but admits he’s “not a true fan anymore.”

Speaking at the homecoming parade at Edinburgh Castle, Hoy said he felt like a “Hollywood star” after being greeted with a hero’s welcome alongside Scottish silver medallists Katherine Grainger, Ross Edgar and David Florence.

An estimated 50,000 people packed the Royal Mile as the Olympians showed off their medals from an open top bus. 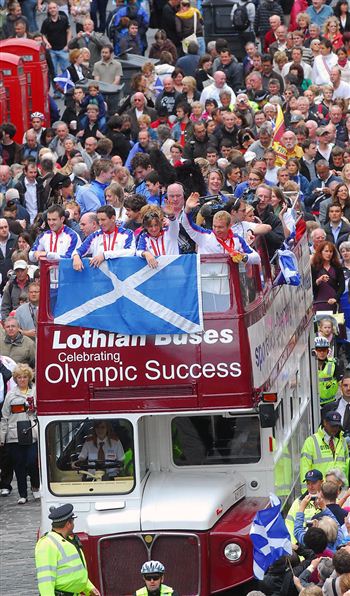 Amid the Olympic hysteria, hero Hoy told of who he looked up to as a child.

He said: “I was a huge Hearts fan. My heroes were John Robertson, John Colquhoun and Gary McKay.

“But I wouldn’t say I’m a true fan anymore. It’s the guys that go to the matches every week who are the true fans.

“I used to go to Tynecastle as a youngster and would love to go back sometime, if it ever calms down.”

But returning to normal life won’t be easy for Scotland’s newest superstar, who admitted he was “overwhelmed by the public response.”

He said: “For a minority sports person to attract this type of attention is really bizarre.

“It’s a day I’ll remember for the rest of my life.

“I can’t believe this is all for me and the team – look at it, it’s like something you would see for a Hollywood star.”

Pupils from Hoy’s former school, George Watson’s College were among those lining the streets, keen to catch of glimpse of the first GB athlete in 100 years to win three gold medals in the same games.

He said: “It’s the biggest thing that’s ever happened in my life.

“To be in the same room, never mind the same track, as Chris is still an amazing thing in itself.

“I’m just in shock. It’s slowly sinking in that we got a one-two at the Olympics.”

After picking up her third silver medal in as many Olympic Games, Glasgow rower Katherine Grainger refused to rule out going for gold in London 2012.

She said: “It’s only two days since Beijing, so it’s quite early to make predictions.

“However I’m not going to make big statements like ‘shoot me if I get near a boat!'”

Canoeist David Florence told of how he’d trained for a decade to get his silver medal.

He said: “I remember being on the starting line thinking ‘I actually feel pretty good.’

“Fortunately the run went really well and when I got to the bottom that was when I felt ten years of pressure off my back.”

The four medallists were joined at the Castle by deputy first minister Nicola Sturgeon.

She described Hoy as “The King of Scotland.”

She said: “I drove into Edinburgh this morning to see that huge banner of Chris on Lothian Road, with the words ‘King of Scotland’ above his head.

“I don’t think there is anyone who would disagree with that.

“You are without doubt the best cyclist Scotland and Britain has ever produced.”

Looking Hoy in the eye, she added: “Thank you for entertaining us and thank you for inspiring us.”

Also out in force were campaigners calling for Meadowbank velodrome – where Hoy trained – to be saved.

There are fears that Hoy’s success in Beijing may never be recreated for Scottish cyclists if plans to demolish Edinburgh’s velodrome are carried out.

Campaigner Kevin Conner carried a huge banner the length of the Royal Mile in front of the Olympians’ open-top bus.

He said: “We’re here to show support Chris Hoy’s comments about how ridiculous this plan is to scrap the velodrome.

“Glasgow is getting a new one for 2012 and that’s great for them, but Edinburgh produced Chris Hoy and the council want to knock down the very birthplace of his success.

“All they have said is that they will build a cycling facility, but until they specify whether there will be a velodrome, we hope Chris will continue to support our campaign.”