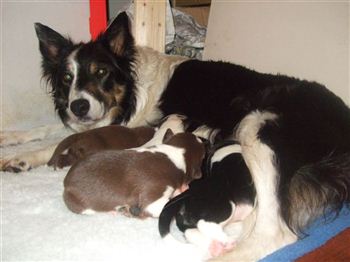 Passengers on the small boat enjoyed some unique onboard entertainment as the pregnant Collie dramatically went into labour en route to the mainland vet.

And the two sailors were heroes of the hour as they successfully helped deliver the pups while also safely navigating the boat to harbour.

Five-year-old pooch, Jess, lives on the island of Lismore with her owners Mark and Denise Willis.  The couple, who work as crofters, had been told it wasn’t safe for the dog to have a litter so wanted a vet to oversee the delivery.

However, the small island with just 174 inhabitants doesn’t have a vet, so the pair took Jess onboard the HV Lismore for the 15-minute crossing to Port Appin.  They then planned on driving the remaining 30 miles to the vet’s surgery. 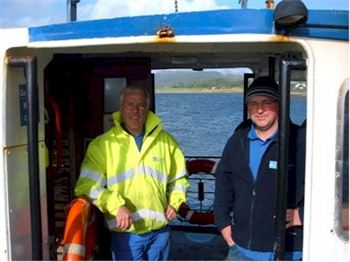 But the choppy sailing prompted Jess into labour and as the 25-passenger boat chugged across the water the first puppy made an impromptu appearance.

Denise said: “We had been up all night with Jess but when none of her litter had arrived, we took her on the first ferry at 8am to make our way to the vet in Oban.

“However we were half way across the water when a small tail appeared quickly followed by the rest of a puppy.

“I didn’t expect them to come out rear first so was quite worried for all the dogs’ well-being.

“However the ferrymen, Donald McColl and Charlie Jack, were very calm and reassuring making sure everything was okay.

“Donald’s brother-in-law works with dogs so he called him and got instructions on what to do.”

As the ferry reached the pier the first puppy had arrived and the second was well on its way.

With the vessel carefully docked, Jess gave birth to the second dog while still onboard the boat.

As the service was due to sail back to Lismore, Denise decided they were as well taking the mum back home to complete her labour.

With a new audience onboard to witness the drama, the boat gently made its way back to Lismore where Jess gave birth to a further two pups.

Denise said: “It’s quite apt that Jess went into labour on the ferry as she absolutely loves the water.

“Normally Collies aren’t that fond of getting wet but she is certainly an exception and loves swimming in the sea.”

Jess gave birth to a litter of four puppies – three bitches and one dog – with all doing well.

The couple are now looking for good homes for the puppies.

The two eldest have already been named in honour of the makeshift midwifes who helped deliver them.

Denise said: “After all their assistance it was only fair we acknowledged Donald and Charlie help by naming two of the pups after them.

“The other two have been named Snowy and Marge by our kids and we are now looking for them all to go to a good home.”

The modest ferrymen are shunning the limelight however and are just happy the story had a good ending.

Joking Donald said: “It was all in a day’s work.”