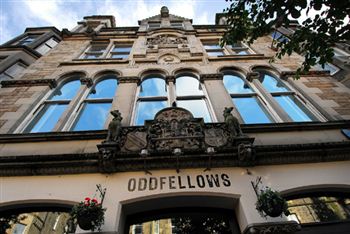 TARTAN Army chiefs have blasted a popular Edinburgh pub after they refused to screen the Scotland match.

Incredibly, bosses at the Oddfellows boozer – which is just half a mile from Edinburgh Castle – decided to show England’s defeat of Croatia instead.

Regulars were left stunned when they turned up to watch George Burley’s men take on Iceland in the crucial World Cup qualifier.

And after being left disappointed, most fans had to then hurry to find another pub in time for kick-off.

Scotland fan Fraser Wood, 41, said: “I was shocked when I turned up to watch the Scotland match. I’d been running about all day so I get to the pub in time and when I got there they were showing the England game.

“I couldn’t believe my eyes. There were a few of us who had to dash out and find somewhere else to watch it.

“I would have thought every pub in the country was screening the Scotland match, and if England fans want to see their team they should do it in their own homes.”

A spokesperson for Festival Inns said: “We have three premises in Edinburgh and we decided to split the coverage of the Scotland, England and Ireland matches between them.

“We are keen to cater for all football fans in Edinburgh, and because the city is so cosmopolitan we thought it would be wise to split the coverage between the three pubs.

“We had over 300 people in Oddfellows watching the match and it was a real success, on and off the pitch.”

But the Tartan Army has condemned the coverage saying the pubs decision is “shocking” and “unbelievable”.

Iain Emerson, editor of the Famous Tartan Army Magazine, said: “It’s bad enough when the BBC shows England games over our matches, but for a pub in the capital city not to show the match is just unbelievable.

“I heard a few guys missed the kick-off and had to dash about trying to find another place to watch it.

“The mood of the supporters towards the team has been great recently, but I’m sure there were a few expletives flying around last night. It really is a shocking decision.”

But one English fan, Coventry-born Adrian Mather, was delighted to find somewhere to watch the game in Croatia.

Mr Mather, 28, said: “I was in Oddfellows for the game and it was terrific. It was really nice to be among my fellow countrymen because I thought I would have to suffer the Scotland game.

“I know some Scots were not happy and had to leave, but there were plenty other pubs in the area to watch Scotland.”