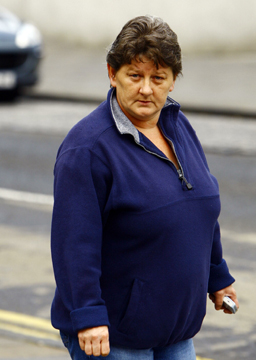 A CARE worker who stole thousands from a pensioner she was supposed to be looking after has been given her FOURTH chance to repay the money.

She is now trying to borrow thousands of pounds from her aunt to repay the cash, after a failed attempt to get it by selling her house.

The frail man gave Armstrong his bankcard to take out money so she could buy his shopping.

She was only caught when the pensioner noticed massive withdrawals from his account.

She previously told Linlithgow Sheriff Court that she would get money to compensate her victim by selling her house in Mayfield Drive, Armadale.

But six months on and four court appearances later, the crook hasn’t found anyone who wants to buy her house.

She blamed its location in an “undesirable” area and the dismal housing market.

So in a last ditch attempt to save herself from jail, Armstrong is trying to borrow money from a relative to repay her victim.

Speaking in court yesterday (Friday), defence agent Laura Russell said: “There have been three viewings but no offers or interest.

“The difficulty is that with the nature of the housing market and the address in an undesirable area the progress for the house sale is not looking good.

“But she has another suggestion. Her aunt has offered to give her a loan of £9000 which she will pay back on the sale of the house.

“She is well aware of the other options open to the court and this is very much a last ditch attempt.”

Despite telling Armstrong he was concerned at the length of time it had taken her to put the house on the market, Sheriff Douglas Kinloch gave her another chance to find the money.

He told her: “It is unfortunate this has been going on for a long time now.

“As I’ve said before, if a way can be found of repaying this substantial sum of money to the person you took it from then that will be an important factor in your favour.”

Armstrong was given two weeks to stump up the cash or face a possible prison sentence.