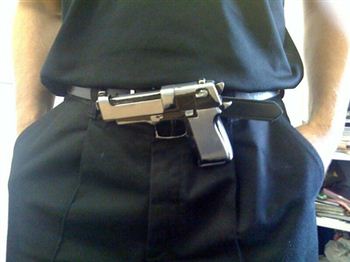 Police have hit out at “naive” travellers entering terminal search and security checks without realising they are carrying weapons.

Now BAA and police are calling for common sense to come before fashion sense, in a bid to prevent unnecessary panic in airports.

He said: “We are finding a growing number of fashion accessories that can double up as weapons.

“They cause security hold-ups and send onlookers’ pulses racing, because of course they are fearing the worst when they see what looks like a gun in an airport.

“In most cases they aren’t being carried as weapons, rather it’s in complete naivety.”

Over the summer months, x-ray machines at Edinburgh airport have also found belt buckles and credit card holders with concealed knives which owners didn’t realised were classed as weapons.

A recent revival in heavy metal music has seen a similar rise in the popularity of bullet belts, according to Insp Dickson.

He said: “I’m noticing an increase in them because they’re back in vogue.

“Twenty years ago this might not have been a problem, but in this day and age you can’t carry anything that resembles a weapon.”

When a wearable weapon is found, police are called in and the owner is offered a chance to leave them in a “sharps bin”.

If they refuse, they can be arrested and charged for possession of an imitation weapon.

Insp Dickson added: “The last thing I want my officers to do is charge someone for being in possession of an offensive weapon, and for them to be denied permission to fly by the airline.

“We want people to enjoy their travelling experience at Edinburgh Airport, but in this era of heightened security, passengers would be ill-advised to wear or carry items which resemble weapons.”