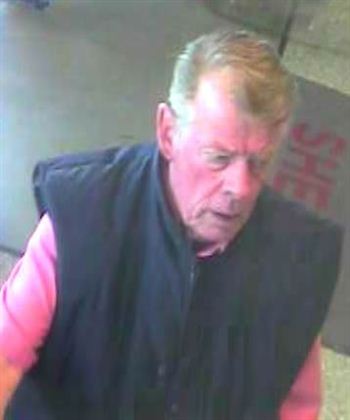 A SENIOR police detective has been forced to take an agonising watching brief while colleagues search for his missing father.

Inspector Graham Goulden, 40, has taken a back seat as fellow officers desperately try to track down his dad, Alan Goulden.

Mr Goulden went missing a month ago and despite an extensive search operation by officers, no trace of him has been found.

Insp Goulden, is part of the Lothian and Borders police force and is based at their Fettes HQ in Edinburgh.

However he has been barred from joining the investigation because of his personal interest in the case.

Insp Goulden has led a number of high profile operations including the Edinburgh Safe City Centre initiative which led to record reductions in crime in 2004.

This success led to him being promoted from Sergeant to Inspector. Insp Goulden’s wife, Gillian Goulden, 46, also used to be a police officer.

His colleague, Insp Murray Dykes, is leading the search for his missing father.

He said: “Mr Goulden has been classified high-risk therefore there was no chance Graham was going to be part of the investigation.

“I would doubt that he would want to become involved anyway because of his obvious personal involvement.

“His father’s disappearance must be even harder for him as relatives will no doubt have a higher expectancy because of his position.”

The force has pulled out all the stops in their efforts to find the missing granddad and even took out a full page advert in a national paper last week.

Hundreds of appeal posters have also been placed in various locations around the city.

Lothian and Borders have carried out an extensive search of a number of areas with diving teams, roadside checks, horses patrols and sniffer dogs all used during the investigation.

Police dogs traced the scent of Mr Goulden to a bus stop outside a Magnet kitchen store in the city’s Corstorphine area.

Despite officers quizzing pedestrians in the area, police have so far drawn a blank.

Relatives have said his disappearance is ’out of character’.

The former RAF serviceman is diabetic and there are grave concerns for his wellbeing as he left his supply of insulin at home.

Insp Dykes said: “Rest assured, like every missing person enquiry, we are doing everything possible to try and find Mr Goulden.

“However as more time goes by the chances of finding him safely diminish.

“His bank account remains untouched and there is nothing to suggest he is supporting himself.

“We are continuing to examine CCTV from the area including footage from buses which he could have used.”

Mr Goulden, a father of two, lives with his partner, Alma Johnston, in Maybury.

He left the RAF around 30 years ago and currently works at a city packaging plant.

Mr Goulden is white, 5ft 7in to 5ft 8in tall, medium build, with a ruddy/red complexion and short, light brown hair.

Last night Insp Goulden refused to comment on his disappearance.