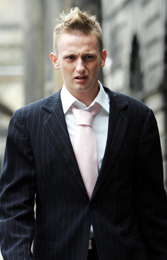 HIBS star Derek Riordan faces an extension to his nightclub ban after his team mates were caught sneaking him into a club.

The striker tried to hide amongst his Hibee colleagues and slip into Edinburgh’s trendy Lulu club at the weekend.

However eagle-eyed bouncers immediately spotted the former Celtic player and refused to let him or his team mates in.

Undeterred, they tried another club where they were also refused entry.

Riordan was initially hit with the Edinburgh nightclub ban for a year after hurling abuse at door staff.  However this was doubled after he was spotted in another club.

Buoyant Riordan was in high spirits after scoring both goals in Hibs’ 2-1 win at Aberdeen on Saturday.

After returning to Edinburgh at 9pm, the troublesome striker and some team mates decided to celebrate the victory with a night out on the town.

The group, which included Hibs club captain Rob Jones, Dean Shiels, Lewis Stevenson and Filipe Morais, headed to the Rutland One Below Late Lounge at the city’s West End.

The club is not yet part of the Unight scheme which imposed the banning order therefore door staff weren’t obliged to prevent Riordan from entering.

After leaving at midnight, the players decided they wanted more booze and walked five minutes to the Lulu nightclub on the city’s trendy George Street.

However as the club is part of the Unight scheme, Riordan is banned from entering.

In a bid to smuggle him in, his team mates clustered around Riordan to try and avoid him being seen.

However the distinctive striker, renowned for his skunk-style haircut, was easily spotted by bouncers who immediately stopped the entire group from entering.

One onlooker said: “The players walked to the entrance in a huddle and were clearly trying to smuggle Riordan in.

“However the doorman saw him straight away and told the whole group they weren’t getting in.

“The fact Riordan has a daft hair cut certainly didn’t help his cause – you can spot him a mile off.

“The players had obviously had a skinful if they thought they bouncers wouldn’t notice.

“To be fair none of them seem to cause any bother and went away without too much protesting.”

The group are then thought to have tried their luck at the nearby Opal Lounge but received a similar reception from bouncers who had been tipped off by Lulu’s door staff.

Most of the players then called it a night after realising Riordan wasn’t going to get in anywhere.

Edinburgh’s Unight scheme involves the local authority, pub and nightclub staff and police officers.  It has the power to hand out bans from three months to life and has issued a total of 130 orders.

Currently 43 Edinburgh clubs have joined the scheme with the three outstanding, including the Rutland One Below Late Lounge, joining in two weeks.

The police officer who has helped set up the scheme confirmed that extending Riordan’s current ban was a possibility.

PC Mark Pickavance, of Lothian and Borders police, said: “Riordan was imposed with the ban after dishing out abuse to bouncers.

“If there was a repeat of this then a ban extension would be considered.

“We will be contacting the door staff involved to establish the exact nature of the incident.

“We are coming up to the first anniversary of the scheme and it has proved to be a great success.

“Incidents of drug use, dealing, and assaults are all down.  Overall, nightclub crime has fallen by 21 per cent since the scheme’s inception.

“As part of the scheme a radio system is in place to keep door staff keep up-to-date with all incidents.  This was clearly operated to great success on Saturday night.”

“If someone has been banned by this scheme then they will not be allowed to enter any of our establishments.

“Our security staff have been fully trained to uphold the standards set by Unight.”

Riordan re-signed for Hibs on transfer deadline day after an unsuccessful two-year stint at Celtic.

He has been involved in a number of incidents which have lead to court appearances.

He was found not guilty of wrongdoing after a mass brawl involving up to 30 people erupted outside a pub in Edinburgh’s Grassmarket in December 2006.

The player was also charged with breach of the peace two years earlier after he allegedly swore at police breaking up a fight in the city’s Lothian Road area, but was found not guilty.

Last night Riordan’s agent, Jim McArthur, said he was unaware of latest incident and refused to comment any further.  The player was unavailable for comment.