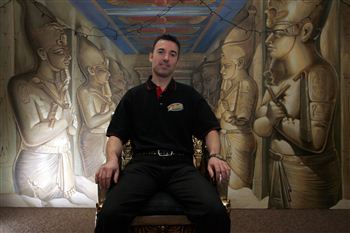 AN Indiana Jones-style play centre has been recognised as one of the best in the UK – with a special honour for its healthy menu.

TimeTwisters opened in 2006 and boasts a multi-level Ancient Egyptian themed play area  which looks like a Hollywood set and has proved a huge hit with young and old movie fans.

Now the company has scooped a prize for refusing to let their young visitors snack on fatty treats and fizzy drinks in between playtimes – only offering vegetable dips and other health treats.

Despite opening just 18 months ago, TimeTwisters was nominated for two awards at the first ever Play Providers Association Aspire awards last week.

It collected  a Bronze medal in the food and beverage category, adding to existing plaudits including a Government Healthy Living Award and a sought-after VisitScotland four star rating.

Delighted owners Andy and Shirley Hixon – who re-mortgaged their home to finance the centre – say the latest award makes their sacrifices worthwhile.

Andy said: “To have been recognised by the PPA for the quality of the facility we have created is a real accolade.

“From the outset our intention was to create a centre that is the best locally and sets a new standard in the UK.

“Winning the Bronze award was a real honour and it’s a great recognition of the quality and variety of the food we offer.”

TimeTwisters was also the only Scottish venue to be shortlisted for Best Indoor Centre Under 12,000 sq ft – only narrowly missing out on that award.

The centre in Sighthill, Edinburgh employs two full-time chefs to whip up a range of healthy dishes all made from scratch with fresh ingredients, including  pastas, chilli, wraps and the signature Pharoah Burgers.