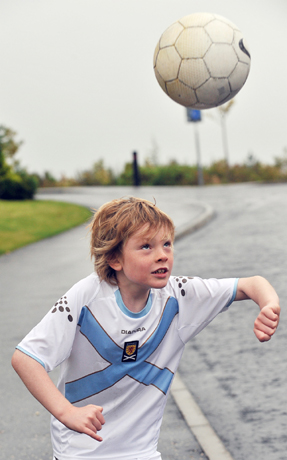 A YOUNG boy who battled back from a horrific car crash will lead out the national team at Hampden Park on Saturday (11th).

Lewis Robertson, 9, has been chosen as a mascot for the crunch match against Norway after his Gran entered him into a radio competition.

The football-mad youngster from Dunfermline, Fife was badly injured in a car crash when he was just 10 months old on Boxing Day 1999.

After a month in hospital suffering from a broken thigh-bone, Lewis emerged with a slight bend in his leg.

And although doctors told the family he would grow out of it, his parents Aaron, 30, and Joanne, 36, were worried.

But the brave Dunfermline fan has fought his way back to full fitness and is all set to walk out with his idols at Hampden.

Excited Lewis said: “I was too young to remember anything about the crash but I have seen all the pictures. I’m glad that I can’t remember the pain.

It’s so exciting to be a mascot for the Norway match and it still hasn’t sunk in. I’m going to walk out in front of 50,000 screaming fans.”

Proud mum Joanne – a self-employed cake designer – says Lewis has been looking forward to his role so much that he has been finding it difficult to sleep as the big day approaches.

And she says the nine-year-old – whose favourite player is James McFadden – has also been rehearsing the lyrics to Flower of Scotland just in case he appears on television. 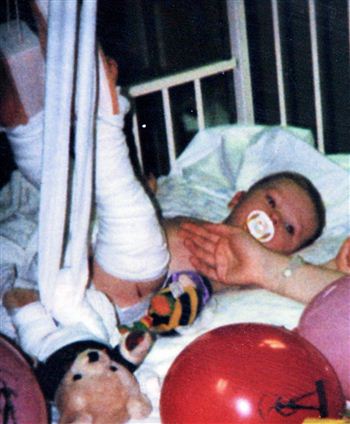 Joanne said: “The whole family are going along to Hampden to cheer Lewis on. It’s going to be such a special day and you never know he might be back there one day as a player.

“We are all really proud of him. After the accident his leg was bent for a couple of years and we weren’t sure if it would be permanent but he has recovered well and now runs about like any other boy his age.”

Lewis’s Gran Moira entered her grandson into the competition after the radio station asked why entrants deserved to be included.

As well as recovering from his injuries, Lewis also helped his Gran recover after she too suffered a broken leg.

The youngster will receive a full Scotland kit and two free tickets to the match as well as the once-in-a-lifetime chance of running out with the full Scotland team.

And plucky Lewis is sure that he’ll bring good luck to the game.

He said: “I think Scotland are definitely going to win. I think it will be a 2-0 defeat against Norway, with James McFadden scoring the first goal.”