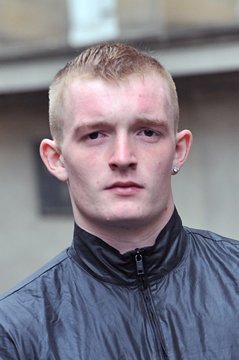 A TEENAGER who stopped a random car and smashed the windscreen has been described as “a complete radge” by a sheriff.

Peter MacDonald, 19, took out his anger on passing traffic after arguing with his girlfriend in the street.

He grabbed road signs and street cones, throwing them at cars and buses before shattering a pub window with his elbow.

Sheriff Gordon Liddle said: “He could be described as a complete radge, if one were to use Edinburgh terminology.”

The thug pled guilty to charges of reckless damage and breach of the peace and is due to be sentenced next month.

Witnesses saw MacDonald and his girlfriend standing in the middle of the capital’s Gorgie Road screaming at each other in the early hours of May 13.

Fiscal depute Kate Mulligan said: “He ran into the middle of the street and threw a traffic cone at a car window and jumped on the bonnet.

She said the driver was “extremely concerned” and had to pull over.

But MacDonald continued on his rampage and ran in front of a city-bound Lothian number three bus.

Miss Mulligan added: “He placed his hands on the window and headbutted the windscreen.

“He then ran over to the Stratford Public House and put his elbow through a window and smashed another.”

Police took him to Wester Hailes police station but he was too drunk to explain his actions.

Solicitor Advocate Andrew Houston said: “He is otherwise a fairly sensible young man and realises when he drinks he gets into trouble.”

Sheriff Liddle called for background reports on the “radge,” who was bailed and will be sentenced on November 6.