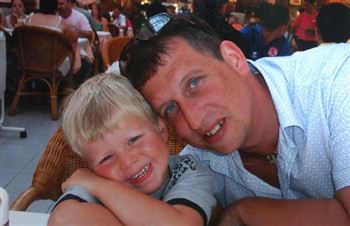 By Alexander Lawrie
A DAD-OF-THREE has tragically died after trying to break up a fight outside his home.

Mr Naughton, a site manager with Stewart Milne Homes, had a heart transplant two years ago because of a heart condition called dilated cardiomyopathy, in which the heart is weakened and enlarged.

The same condition is also thought to have killed his father 29 years previously.

His devastated wife Donna, 37, has spoken of her heartbreak of trying to save her husband after the incident.

She said: “There was a loud disturbance outside between a couple of the neighbours and Davie went out to see if he could calm things down.

“He was only out there a couple of minutes. When he came back in he looked like he was having a turn and then he just collapsed.

“I tried to give him CPR until the ambulance arrived but it was no good.”

Mrs Naughton is now left to raise her two children, Calum, seven and Ava, two, on her own.

The brave dad also had a son, Owen, 23, from a previous relationship.

Mrs Naughton said: “I sent Calum to school yesterday and I only told him when he got home. He knows that daddy had a new heart and I explained to him that the new heart broke.

“Davie was a family man through and through. He doted on his children.”

The street in the Moredun area of the city has been inundated with problems over the past two years.

Mrs Naughton revealed David had intervened in problems outside their home on more than one occasion.

She said: “The police gave us an anti-social behaviour diary to keep a track of things happening on the street.

“Davie couldn’t stand it. He used to wonder why hard-working families had to put up with it.”

Agnes Mackie, 61, who lives nearby, said: “It’s absolutely horrendous what’s happened to Davie. He was such a nice guy and always had a smile on his face.

“It’s a nightmare around here at nights, especially the weekends. I really feel for his wife and their two kids. They must be devastated.”

Mr Naughton’s body was due to undergo a post-mortem yesterday (Tues).

A police spokeswoman said: “Police were called to a disturbance in Moredunvale View at about 8pm on Friday night (October 11).

“As a result of this, a man was taken to hospital and subsequently died. Police are keeping an open mind, and enquiries are ongoing to establish if the death is linked to the incident.”