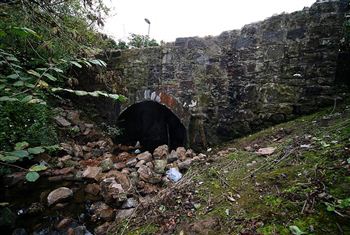 A HISTORIC stone bridge has been attacked by a thug wielding a sledgehammer.

The 100 year-old bridge in Dedridge, Livingston suffered extensive damage during the mindless attack.

Repairs to the iconic bridge are estimated to cost at least £5,000.

Police have received information that the damage was caused by a person deliberately striking the walls of the bridge with what appeared to be a sledge hammer.

The hammer-wielding suspect targeted the bridge in the early hours of Monday 13th October.

A West Lothian Council spokesman said: “ The masonry arch bridge at Dedridge is in council ownership. An emergency inspection has been carried out to ensure its stability and temporary barriers have been installed to cover the damaged bridge parapet in the interests of public safety.

“We will be arranging a repairs programme to the damaged bridge parapet. We anticipate the cost of repairs to be in the region of £5000.”

A Police spokesman said: “This is a wanton mindless act of vandalism to an historic icon in this part of the town.  An estimated cost of up to £10,000 to repair the bridge has been quoted.

“The bridge will be closed for some considerable time while repairs are carried out.

“We would appeal to anyone who knows who is responsible for the vandalism to contact the Police.”