Jamie Makarewicz, 23, lost control of his MG sports car on the M9 in the early hours of Saturday morning.

Last night at the family home in Falkirk, his grieving dad paid tribute to a son who was a “wonderful boy”.

Jamie had just set up a record label called Concept Theory Productions and had spent the summer producing his friends’ band’s music.

His dream was to make music production his full time career, but now friends and family have been left wondering what might have been.

Yesterday, girlfriend Nadine Lapsley, 21, used a silver spoon to place a plant in Jamie’s memory at the scene of the crash near Linlithgow. 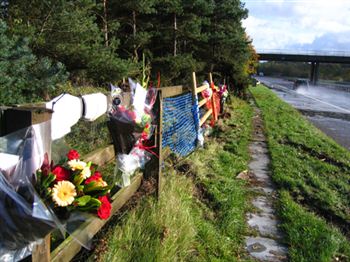 She left him a message saying: “We resisted gale force winds and rain to plant a plant with a silver spoon – nothing but the best for you baby.

“We were going to spend our lives together, we promised.

“I’ll never understand why this happened and I’ll regret nothing more than letting you walk out that door.

“Everyone is breaking their hearts, especially me.”

He said: “We are all devastated. How can you put how we feel into words?

“My son was a free spirit, a wonderful boy. That is all we can say just now.”

In a tribute to her brother on a social networking website, Jamie’s sister Julie, 20, told how she loved her brother despite their arguing.

She said: “Nothing seems real and I thought you would be here forever.

“I have so many regrets about our fighting but people have to know that is what we were like!

“Inside we both know we loved each other to bits, we just had a strange way of showing it.

“I know you gave us that rainbow this morning as a sign you are okay.”