Sir Sean’s twang is top of the Scots 276 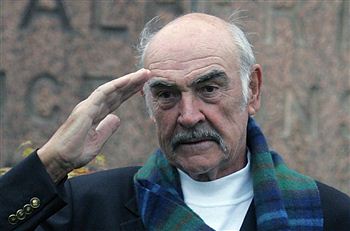 Music presenter Edith Bowman and Irish actor James Nesbitt are also high up on the list of the most-loved voices.

And while the former 007 star’s gravelly voice is the best loved celebrity accent, Scots have decided the worst tones belong to Londoners Amy Winehouse and David Beckham.

Joining the Rehab singer and the ex-Real Madrid star on the list of most hated accents is Coleen Rooney and Charlotte Church.

Prime Minister Gordon Brown just scraped into the top ten of most liked accents in the poll of 3,000 people carried out by budget hotel chain Travelodge.

The study also revealed Scottish phrases and sayings are like a foreign language to the majority of Brits.

And some Scots have shown they also struggle to decipher some English terms and phrases.

Half of Britons failed to understand the natives when travelling north of the border, yet 85 per cent could easily identify French, German and Spanish terms.

Nine out of ten Brits could translate the Spanish phrase ‘Hasta la Vista’– meaning ‘See you later’ – and 70 per cent knew that an Italian ‘Piazza’ was a town square.

But an incredible 47 per cent had no idea what a ‘bampot’ was – with most believing it to be a ‘saucepan’ rather than the correct meaning of ‘fool’.

While just 34 per cent of Brits recognised the Scottish phrase ‘numpty’, findings revealed that a massive 85 per cent knew that a German ‘Weiner’ was a sausage.

The study also reveals Scots are just as baffled when travelling south of the border.

Over half of Scots (51%) thought a Cornish ‘oggy’ (a pie) was either a football chant or a cream tea, while 36 per cent were mystified by the common expression of their Geordie neighbours, ‘haddaway, man’, meaning ‘I can’t believe it.’

Greg Dawson, Travelodge Director of Communications, said: “The British traveller is often accused of not understanding the local culture when traveling abroad but their knowledge when holidaying in Scotland is even more stark.

“We spend so much time and money traveling abroad that we often ignore what is on our doorsteps.”

In a bid to help dopey Brits better understand the Scottish lingo, Travelodge has developed a free guide to common Scots words and phrases.

Words such as ‘bairn’, blootered’ and ‘stotter’ are all explained, and to also help Scots understand English regional slang, guides have been created for nine other popular cities and regions across the UK.

Mr Dawson said: “Regional accents – whether you love them or hate them – are as diverse as ever in Britain, but it seems we have something of a national communication problem on our hands, as many Brits simply don’t understand some of the UK’s most loved regional dialects.

“With our Lingo Busting Guides, we hope to help Brits converse more easily with locals when they stay in our hotels, helping them to fully absorb the distinct regional cultures that the UK has to offer.”