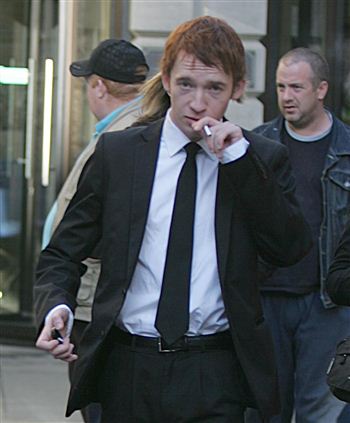 A PROMISING student who sparked a ten minute gun siege at his home has avoided jail.

Stuart McAlpine, 19, locked his mum out of the family home and threatened police with an air rifle after becoming depressed over her and his father’s break-up.

An armoured response team had to race to the family home in Penicuik, Midlothian, where a dramatic stand-off ensued – including McAlpine threatening to shoot them.

Officers eventually found the crazed teen lying in his loft and he was arrested before being sectioned.

He later admitted pointing the loaded rifle at two Lothian and Borders Police officers during the February incident.

But yesterday (Wednesday) at Edinburgh Sheriff Court he was sentenced to 200 hours of community service after a psychiatric report said he was no longer a danger to the public.

The court had earlier heard how McAlpine broke down after his parents split up.

The engineering student – who is currently attending Edinburgh University – had been feeling depressed and anxious over the split.

And on February 23 the pressures came to a head when he locked his mum out of their Assynt Bank home and was seen toting the weapon.

Worried for his wellbeing, she called police who sent an armoured response unit.

Officers saw him at a window at the front of the house holding the single barrelled rifle and tried to calm him down.

The nervy stand-off lasted for up to 10 minutes but finally police were able to find him in the loft of the house.

His lawyer, Gillian Law, told the court her client had pled guilty at the earliest chance and had shown “complete remorse” over the incident.

Sheriff Gordon Liddle said: “Use of an air rifle in this way is something that the public have to be protected from.

“On the other side of the balance is the fact that you have not been involved in any criminal activity before this and the circumstances leading up to it as well as the mental state you were in.”

Sheriff Liddle added that McAlpine’s problems seemed to be behind him and that he did not expect to see him in court again.

He ordered him to carry out 200 hours of community service.