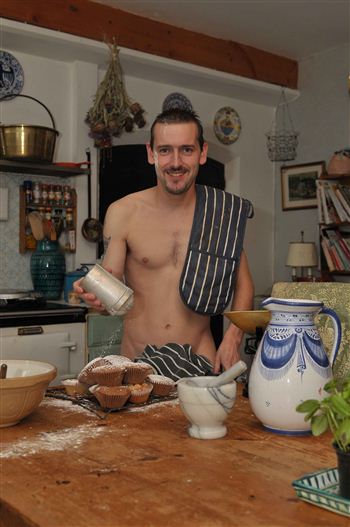 BRAVE Borders men have stripped off for a calendar shoot to raise money for their village hall.

Farmers, posties and footballers all agreed to pose in the buff, and were seen removing their uniforms in the name of art in various parts of Greenlaw last week.

And the organisers did not have to look very far for volunteers as over 30 local hunks agreed to take part.

The idea was first mooted at a meeting of the village’s Memorial Hall Restoration Group.

The hall has fallen into disrepair and the villagers are hoping to raise up to £250,000 to complete the refurbishments to the kitchen, toilets and roof.

Committee member Kathryn Todd, and wife of Mr April, farmer Alastair Todd, said: “A person from the village came up with a good idea to do a calendar of local scenic views. But I thought it would be much better to do a Calendar Girls-type calendar with the men from the village.

“We sounded the men out at a local sports day and the response was magnificent. There were plenty of takers to get their clothes off.

“They weren’t bothered in the slightest about stripping off – in fact we had a reserve list just in case anybody pulled out.” 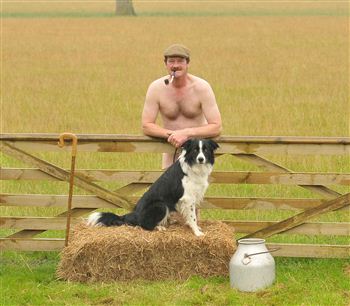 The committee approached professional photographer Adam Whellan to help them out with the saucy snaps.

He said: “It was a horrible day – it was drizzly rain all day for the boys but they were superb and just got on with it.

“They needed no persuasion. It is the first time I have taken photos of naked men and I think I will be scarred for life.

“Posing was no problem, but they did have a couple of drinks beforehand.”

And every member of the Greenlaw Football Club was more than keen to shed their strips for the cause.

Player/Manager George Blaikie said: “The whole team did it apart from a couple of the younger ones I let off. It wasn’t hard to persuade them – footballers like to get naked.”

A committee was set up last year to resurrect the village’s war memorial hall after it fell into disrepair.

The building was built in 1882 and was used as a working men’s club after WW1. It then suffered damage in 1941 after being struck by WW11 bomb in an attack where three British soldiers were killed.

The ‘Tools of the Trade’ calendar is on sale for £5 from Saturday.

KT inspires singer to takes the States by storm