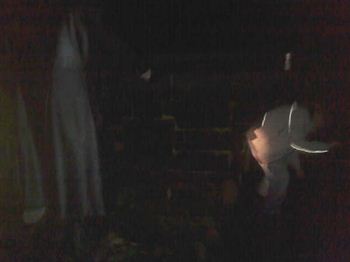 TWO pals claim to have captured mysterious ghostly images on their mobile phones after an unsupervised visit to a graveyard dubbed the most haunted in Scotland.

Damien Kielty and Steve Greenwood were in what is considered the spookiest graveyard in Scotland – the covenanters’ prison in Edinburgh’s Greyfriars Kirkyard.

The pair felt nothing as they looked around the spooky vault, but took some pictures just in case before they left.

And they couldn’t believe their eyes when they looked back on them after and discovered two ghostly figures lurking in the background.

The photographs show the outline of a woman and a young girl to the left of the picture, apparently just hovering in mid-air.

Damien says: “It wasn’t until we saw the pictures that we even realised we’d been in the presence of a ghost.

“Neither of us saw a thing at the time and what freaks me out most was that I must have walked through the apparition immediately after taking the picture.

“I was so scared I didn’t sleep for two nights, I was petrified that the ghosts may have somehow followed me home.

But the brave pair were intrigued and they decided to risk going back to the vault with a friend who had an interest in the occult to see what they could discover about the mysterious figures.

He sensed that the smaller apparition was that of a young girl called Alison Greer, who had died when she was just eight to ten years old.

The vault originally belonged to a well-to-do Edinburgh family, the Shairps, who descended into poverty after being caught scamming a bank.

It is thought that the tall woman – who looked to be wearing a light-coloured dress – may be the mother of the family, and Alison her maid.

Damien should be used to dealing with spooks, his brothers John and Gerry run some of the ghost tours on the Royal Mile.

He said: “My brothers John and Gerry even had a show at the festival this year telling the tales of the hauntings at Greyfriars Kirk.

“Their show won the Spirit of the Fringe Award, but now I’ve had my very own spirit experience, I’m not so sure it’s something I want to repeat.”

Stunning estate “haunted” by white lady and trapped bagpiper on sale for £1.25m